The Leftists Are All About Sexual Abuse: Another Jesuit Liberal Accused in Belgium

He is an Old Liberal Secular Jesuit and Green Party Member.  That he is also guilty of sexual abuse, suits his political convictions very well. 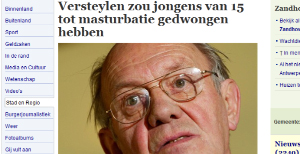 (kreuz.net) The Belgian media bosses have their next abuser who is supposedly associated with the Church arena.

It is a question of the Old Liberal, left-leaning, civil Jesuit, Father Luc Versteylen (83).

Before his entrance into religious life the later left-ideological figure was a member of the extreme-right 'Verbond der Deutsche Natinonaal-Solidaristen'  which had existed till 1941.

In May  1970he founded an organization in the area of Viersel -- which belongs to the north Belgian community of Zandoven -- under the name of "Leven in de Browerij", Life in the Brewery" a leftist, so-called "alternative-Christian society of life".

It was established in a former brewery.  It was made up of a class of fourteen year olds, who belonged to the Jesuit-run Xavieriuscollege in Borgerhout near Antwerp.

In this milieu there were various -- at the time decisively left-extremist  -- moved to pedegogical adventures and sexual shamelessness.

Here was one of the first 'green' --ideological parties in Europe.  They called themselves 'Agalev'.

The anti-Church media are as expected completely enthused about all of this.

Actually in the Community of Life it was -- then held for normal-- to initiate two abuse of two fifteen and sixteen year old sexually mature boys.

In an open letter Father Versteylen answered the charges, that he had in those times "engaged in a quest for a new relationship to the body" surely gone to the limits.

The left-Jesuit is, after the extreme-left Fr. Francoi Houtar (85) and Bishop Roger Vangheluwe of Brügge, the third suspected sexual predator, who without exception, belong to that left- and homosexual friendly wing of the Church whom the media bosses love to celebrate.

Send criticism and comments to vekron99@hotmail.com
Tancred at 2:44 PM
Share