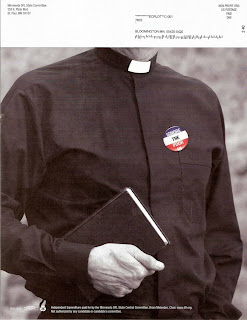 The Democrats are proud of their generosity to the poor, and owing perhaps due to some unclear thinking aren't aware that charitable acts must be of free will, and there's no merit in being generous with other people's money. Hat tip to Ray at Stella Borealis for this item. But with them it's always the same, high crime and higher and higher taxes.

Now there were some that had indignation within themselves, and said: Why was this waste of the ointment made? [5] For this ointment might have been sold for more than three hundred pence, and given to the poor. And they murmured against her [Douay-Rheims] Luke 14: 4-6.

A recent postcard mailed the the MN DFL State Central Committee has a picture of a priest wearing a button that says "Ignore the Poor".

The picture takes up the entire side of the postcard!

How low has the DFL party sunk that they would mail out pictures of a priest urging people to ignore the poor?

In their haste to try to run from the Democrat agenda of Higher Taxes and ever more Inefficient, Ineffective and Expensive Government programs, the DFL has gone too far.

The other side of the postcard talks about Government Health Care. Government run health care means the end of Catholic Hospitals. I guess the Democrats have to demonize Catholics in order to justify their stand on Government Run Health Care