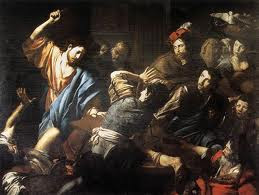 More crying and weeping about "incivility". Heaven forbid that Jesus should have called people names, bound up a whip of cords and beat the crap out of people...

If Catholics always and everywhere took the point of view taken by a lot of contemporary Catholics and people like Deal Hudson, Catholicism would never have evolved beyond a parlor game.

It's hard not to view his role as being that of a wet blanket for any fervor on the part of Catholics in general. Wherever it rises up, he feels compelled to impose his layman's authority and disapproving glance to shame Catholics into silence while their legacy continues to be bought and sold on the free market.