(Rome) On October 28, the Vatican announced the appointment of 27 new members of the Roman Congregation for Divine Worship and the Discipline of the Sacraments.It's an intervention that shifts the internal equilibria, and that is exactly what is intended. It was not said who which members were confirmed previously by the pope, including known names from the pontificate of Benedict XVI. Now there is clarity.
It is thanks to the Vaticanist Sandro Magister, who has made the effort to understand the extent of "renewal".The circle of the newcomers does not show a uniform manuscript, but points in a particular direction.

The Vaticanist Sandro Magister researched the names of former members who were not confirmed by Francis:
Almost all of them are known Ratzingerians, or were in conflict with Pope Francis. Usually both are true. The Cardinals Piacenza and Burke were dismissed in 2013 and 2014 as heads of dicastries. In replacing the head of the dicastry by Cardinal Grocholewski,, Bergoglio appointed his former ghostwriter in 2011, Victor Manuel Fernandez, who was rector of the Pontifical Catholic University of Argentina. Sparks flew between Cardinal Rivera, Primate of Mexico, and the pope in Mexico during the Pope's visit and even now with the appearance of the new apostolic nuncio in the conflict over the legalization of "gay marriage". Sawing the legs of the chair of Cardinal Pell in papal circles has been going on for quite some time . The Cardinals Scola, Ouellet and Amato seem to be already scheduled for the replacement. Pope Francis did not confirm the Emeritus Bishop Mario Oliveri of Albenga-Imperia, as expected.
Only two, Archbishop Michel-Marie-Bernard Calvet of Nouméa in New Caledonia and Bishop Julián López Martín of León were confirmed among the Archbishops and Bishops, who were previously members of the Congregation, but nine were not.

In the Vatican, it is denied that the reformation of the Congregation had taken place to "discipline" its Prefect, Cardinal Robert Sarah. The talk is of "necessary adjustments". The reality looks different. "Cardinal Prefects Sarah has not been given," said the Vaticanist, Sandro Magister, "the supporters of the reform he had hoped for." What was meant actually is the reform of the post-Conciliar liturgical reform of 1969/1970.
The new appointment of the Congregation was by no means accidental, after Cardinal Sarah had come out with the public demand for a "reform of the liturgical form". Before the summer break, he asked all the priests worldwide to go back to celebrating Mass facing the East, and cited the coming First Advent Sunday as a suitable deadline to implement this change. The Vatican denied changes to the liturgy, but the Cardinal insisted. Among other "unfriendliness" was the reorganization of the Congregation at the end of October.
Albert Cardinal Ranjith, Archbishop of Colombo (Sri Lanka), who was himself secretary of the Congregation for several years, is among the "survivors" on the side of Cardinal Sarah. The friend of the traditional rite has a solid liturgical education. He speaks fluent English, French, German, Italian, Spanish, and also speaks the ancient Greek and Latin languages. The Cardinal seems to have impressed Pope Francis during his visit to Sri Lanka in January 2015.
More important, however, are the "watchers" placed aside the cardinal. This obviously applies to Beniamino Stella, who is not a liturgist, but a close confidant of the Pope. The same is true for the Bugnini student, Piero Marini, who is, however, a proven expert. The co-architect of the post-conciliar liturgical form is regarded as a decisive opponent of a recovery of the traditional form of the Roman rite.

The names of all the cardinals and bishops who were confirmed as members:
The General Assembly of the Congregation, together with Cardinal Prefect Robert Sarah and Secretary Archbishop Arthur Roche, now has a total of 38 members, eight more than before. More than 70 percent were newly appointed.
The first phase of the reconstruction of the Congregation had already taken place in the summer and autumn of 2014 when Pope Francis returned the then Prefect of the Congregation, the "Little Ratzinger" Antonio Cardinal Cañizares as Archbishop of Valencia to Spain, for construction in the Dicasterium. All advocates of a "reform of reform" were replaced by liturgists of the cut of a Piero Marini. When Cardinal Sarah was appointed as new Prefect on 24 November 2014 and took office soon afterwards, he was already isolated from the Congregation of Worship. In the words of Magister,

"Cardinal Sarah is condemned to lead offices that work against him."

This should also explain his change of strategy, to be heard in other ways, especially through his books. In recent his book "La Force du silence " (The Power of Silence), which was published on 6 October in France, he reaffirms in the face of Vatican denials whether by announcement, desire or prophecy that the "reform of the reform" would take place.
Pope Francis and his circle seem to have understood the words as a threat. Three weeks later, phase two was carried out in the reorganization of the Congregation.
Text: Giuseppe Nardi
Image: Sacra Liturgia (Screenshot)
Trans: Tancred vekron99@hotmail.com
Link to Katholisches...
AMDG
Posted by Tancred at 1:10 PM 4 comments: 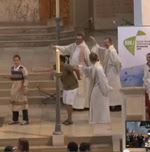 On the 25th of August 2012, the Diocese of Speyer organized a Mass server day in Kaiserslautern.

This provided the idea to hold a dance flashmob in the Church.

You can see here in the video, where the priest is fully vested and froclicking around in the sanctuary. (At 2:00 minutes a closeup)

A side note: The Priest that hops in the sanctuary in front of the other two clerics is Carsten Leinhäuser.

"For days, I have a kind of" spiritual heartburn": As soon as I turn on the news, it made me mad! What I have read about the SSPX, that's just too much!".

"I also wonder where the ramifications of this is: If the SSPX is brought back into the boat of the Catholic Church, despite these stark thematic and theological contradictions - why can not the Protestant Brothers and Sisters." The "few" contradictions can be but also set aside somehow. And at least it is not alleged about me on their part, that I play with the devil when I celebrate the Eucharist."

"If the lifting of the excommunication was an act of love and grace - then why can't we not also be more generous with the divorced and remarried? THIS is a real problem that I continually encounter in ministry: Because there are people who have a profound spiritual life and suffer like dogs under the Communion ban."

Even more frightening his evaluation about the original, totally Catholic Sacrifice of the Mass shaped for well over a thousand years from tradition and confirmed by the Council of Trent:

"I personally have no problem with the Tridentine rite - even if I can do very little with it on the spiritual level."

Anyone who sees this video course will understand that the sacred worship of the atonement of Christ can not be brought into conformity with the ideas of Pastor Carsten.

In all these perversions and abuses of the liturgy, one must always ask: Do the Cardinals in Rome, the Pope, know what is happening in local churches?

The impression will not be lost that Rome lives in a kind of parallel world: on St. Peter's Square, thousands of people pay homage to the Pope with cheers at every large audience. Since you have come to the unavoidable impression: the Church crisis is not so bad.

For this reason pius.info regularly publishes photos that show what is repeated hundreds of times in all the parishes. This is the reality at the grassroots: Human-centered Pop-Masses and "Jesus is our brother" theology.

But this has nothing in common with a solemn papal office in St. Peter's, to which thousands of pilgrims to Rome come.

It is not a question that the altar should not be merry! Quite the contrary! Just ask yourself over and over again, what is it in every community in Germany has a practical parish hall? Parties yes, but please not in church! And certainly not in the pop-dance chasuble around the altar!

If you want to contact the Leinhäuser priest directly to question him on this "dance flash mob" in the Church: vaticarsten@gmail.com (Please write, as always, politely and clearly, despite the degrading of the Blessed Sacrament.)