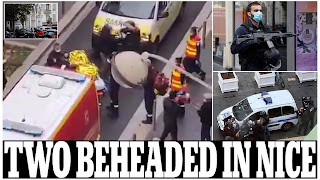 Edit: it’s getting almost to the level of an Islamic Revolt.

[Daily Mail] France has been struck by two terror attacks within hours of each other as three people were killed - two of them beheaded - in an attack inside a cathedral in Nice before a gunman was shot dead by police in Avignon.

The first attack began around 9am at the Notre Dame cathedral in Nice where a knifeman beheaded an elderly female parishioner and a male church warden, fatally stabbed a second woman, wounded several others, and was then shot and arrested by police.

Two hours later, a gunman threatened people on the streets of Avignon - 120 miles from Nice - while shouting 'Allahu Akbar' before he was fatally shot by police.

"Mohammedans"...….what an antiquated name for them. That is a straight out of the Victorian Age. I have not read or heard of them called that ever, but I have read that name before.
Back in the 11-th thru 14th centuries they were known as SARACENS. THen later on in the 16th thru 18th centuries they were lumped under the generic term "Turks", because during that time, most Islamic countries were part of the Ottoman Turkish Empire (ended, 1922).
But in Victorian times, they were known as Mohammedans, or Musselmani( almost sounds like "musclemen", but it was actually a term used in Italy and parts of Europe all the way up to the early 20th centuries. The other name they are know by had from time to time various spellings as well.....Moslems, Muslems, Mooslems…...and today mostly spelled as "Muslims".
Whatever name they went by or were called, it was NEVER good. It always conjured up hordes of barbarians, sinister, thieving people, heathens, or more often than not today....terrorists.
JUST like African-Americans in the USA today, the sight of, or just the name "Muslims" has a bad connotation in many parts of the USA and the world. The Chinese and most of Asia except where they are the majority or a very significant minority, hate them. The Chinese hate black people, which is rather strange, because the Chinese are hated in so many places that they should be more welcoming.
It i a tragedy what is happening in France....he result of liberal immigration policies allowing for Fance to be flooded with millions of MUslims. Other countries have been likewise infested. The best solution, is to close the doors to these people en masse, and when they arrive, immediately deport them back to the Middle EAst, or Africa where most come from. President Trump in the beginning of his term had the right idea to ban them.....but then the crying liberals and radicals thwarted his great efforts at securing our country.... and in Europe, others like faggot loving Pope Francis, or recent gay civil unions allowance fame, are champions of these Muslims....and see to evil in them. THey are misguided, or delusional and should be ignored, or deposed.
I admire people like the great Italian politician who tried last year to keep Muslims out (I forgot his name, but Francis actively was against him in Italian elections and refused to receive him in audience). Poland and Hungary both staunch CAtholic countries, have increased restrictions on their borders, and rightly so. THey ignore Francis. He is mocked and ridiculed there, and in Italy and elsewhere forbeing an immigrant/Muslim lover.
Keeping these people out, and deporting those already in, is the best way to stop this slaughter of innocent CAtholics and believing Christian people.

In my first line, I meant, "I have not heard them as that ever". But I have read of them labeled "Mohammedans"

It implies the murderous, thieving, raping, slaving and traitorous lot they are.

We must go back to Holy Sacrifice of the Mass and Sacraments as they were before 1950,including the Sacrament of Holy Orders.
God bless
-Andrew

A good Mohammadan will do this sort of thing. It's a natural.