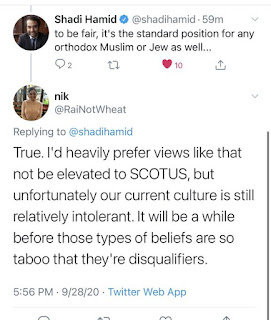 “They’re a small percentage of the American people, virulent people, some of them the dregs of society,” Biden added. “And instead of using the full might of the executive branch to secure justice, dignity, safety for all, the president uses the White House as a literal bully pulpit, callously exerting his power over those who have little or none.”

That's rather hypocritical, when Biden himself, and all his supporters fal under the category of "the dregs"....especially AOC, Ilhan Omar, Schumer,Pelosi et al.

Biden is a Roman Catholic, when it is convenient.

Biden is a heretic from the Catholic Church.

Biden is a Novus Ordo “catholic.” He is not a Roman Catholic. He fits in perfectly with the new Novus Ordo V2 religion.

"Biden is a Novus Ordo “catholic.” He is not a Roman Catholic. He fits in perfectly with the new Novus Ordo V2 religion."

As a second thought, any Catholic, of any type (Novus Ordo, Traditionalist, schismatic sede- vacantist, Byzantine, etc.) who would vote for Biden knowing full well his record...and for Harris (a 100% anti-Catholic BIGOT), is NOT a true CAtholic of any type.

Biden claims that he carries a rosary in his pocket that he will periodically take out during the day. He claims that he is very religious and prays the rosary when he is depressed. Who believes that "drizzle"? His son Hunter was discharged from the Marine Corps reserve in 2014 for cocaine use. He also was sent by his good old dad into Ukraine to "milk the system".--- I visited Romania which is next door to Ukraine while with the Navy. Nothing that "Sleepy Joe" says rings true. He lives in a dream world and now wants a "virtual debate". Periodically, his handlers take out a packet of "smelling salts" and hold it under his nose. He then comes to life and spouts the party line while those with any religious sensibilities "hold their nose". Once he delivers the "party line", he then falls back asleep and rolls his wheel chair back into the sun room.

No, he's identifying as 'dregs' the violent boorish gun toting pagan morons who form the Trump base. Biden is right. These clowns have made the USA the laughing stock of the free, intelligent global community. The drop kick Trump is sending millions off into gales of derisive laughter with his refusal of a second 'debate' when it became clear that he would not have his bully pulpit and the moderator would flick off his mike button.
What on earth will the knuckle draggers do when the Great Dribbler gets shafted on November 3? Throw a tantrum?


“One hundred years after the French Revolution, the editors of Civiltà Cattolica, the official voice of the Vatican on political affairs, came to a startling conclusion: any country which turns away from laws based on the teaching of the Catholic Church and God’s eternal law will end up being ruled by Jews. These three articles, originally published over the fall of 1890, explain in detail why this is so, for both France in 1890 and America today.

Click in the link to get a free ebook about the revolution in America/Th eJewish Question. and what the Talmud is al about

Biden is correct:
"We are blasphemed, and we entreat; we are made as the refuse of this world, the offscouring of all even until now."
Corinthians 4:13
True Catholics are hated by the world

Amen!
It's safe to say many of us
experience this in our daily lives.
-Andrew

And HArris was asked a question by a reporter froma liberal station about "packing the Supreme Court". She had an arm full of paperwork, and a big mask on her face, and brushed past the reporter, rudely snapping "Joe has said all there is to say about that..." and kept walking.

Who would want a nasty bitch like that as President.....and from her performance at the Vice Presidential debates, that is exactly wht she is.

Let's face it. Biden has has two small brain aneurisms according to some Media( my uncle is a Dr., and he said there is no such thing as a "small" brain aneurism.....any of that is extremely grave). If Biden were to drop dead one day as president.....does anyone want her as President. Nasty attitude, etc. I don't think so.
sHE REMINDS ME OF SO MANY OF THE WOMEN I've HAD THE MISFORTUNE TO WORK WITH.

You're last sentence sums it up.
Keep the faith,Son.

To Dieter Mohr-
Although it's too early to predict, I would not speculate who will win the presidential election on NOvember 3rd. You'll jinx your hopes and dreams. I remember four years ago when I was still in my 20's hearing the media and polls predicting a Hillary sweep. She's leading 10 points overall, 6 points here, 8 points there! Didn't turn out that way. For weeks, all these obnoxious liberals, femminists and others were deriding Trump and saying he had no chance. But when the smoke cleared, Trump came out the victor, and Hillary and her campaign was left in the trash can. I remember all the women at the Clinton "Victory Party" sobbing and crying their eyes out . "THis was OUR time, this was OUR time!!!!" I remember one of them sobbing. No way lady....it was the guy the real people wanted time, not the abortionists, radial feminist's, army of LGBTQ peoples time.
To be honest, I dislike some of what Trump stands for, and I think that although his huge rallies are great, they are open to the possibilities of COVID infection, hopefully not. I did not come to actually hate Biden and his campaign and agenda, until I read that his people like HArris, AOC, Ilhan Omar, Sanders, Pelosi, Schumer, Schriff, etc. endorse the most radial agenda, including the latest term form of abortion,,,,,,,that is when the baby is killed immediately after the mother delivers it. When I read that, I turned against all of what Biden and his people stand for.
And if you believe Biden will run the show, you're delusional. The people who will run things are HArris, AOC, Ilhan Omar, Sanders, Pelosi, Schumer, etc. BIden is their puppet.

Yeeeaaaaahhhh, biden's the KING of accuracy and technical language (and unfettered honesty, while we're at it)....LMAO

seems all too much censorship on this topic