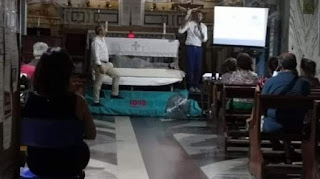 Edit: Cux thinks it’s so cute that Catholics on line are angry their places of worship are being abused for such trivial purposes, while Schönborn’s resignation hasn’t been accepted and Bergoglio talks about food and sex like some elderly Italian gossip columnist.

Maybe he’s trying to keep regular churchgoers in slumber as their church continues to decline?

[Cux] Given everything going in the world today, you would think Catholics could find better things to argue about than “mattress-gate,” but nonetheless believers in the small southern Italian city of Cirò Marina recently have devoted an extraordinary amount of energy to debating the wisdom of opening the Church of St. Cataldo the Bishop to a mattress display.

A picture from the event, which showed a mattress on the floor in front of the church with someone lying on it as another person spoke into a microphone, generated a tidal wave of commentary on social media and saturation coverage in the local press. Most people seemed to assume that the church was hosting a mattress sale, which triggered endless references to the Gospel story of Jesus tossing the moneylenders out of the temple.

Aggravating the situation is that the event took place inside the church, was has been condemned for various structural defects. The pastor has been compelled to celebrate Mass outside ever since Italy permitted the resumption of public liturgies in June, leading people to charge that the pastor was also placing people’s safety at risk.

In reality, the pastor told local media outlets, there was no sales pitch going on. The event was intended to help people manage common maladies by focusing on their sleep habits and patterns, and it was presented by a doctor and a pharmacist rather than a furniture company. Moreover, he said, the relatively small size of the gathering permitted it to take place safely indoors.

Might just as well use churches for this.
No one uses them for churches and hasn't for a long time.

The Bishops + "Pope" mandated apostasy from Catholicism post 1967 and this church event is a sign our Blessed Lord is punishing us for sacrilege.
This is just the start,read about what they used Churches for during the
French Revolution.
God bless
-Andrew