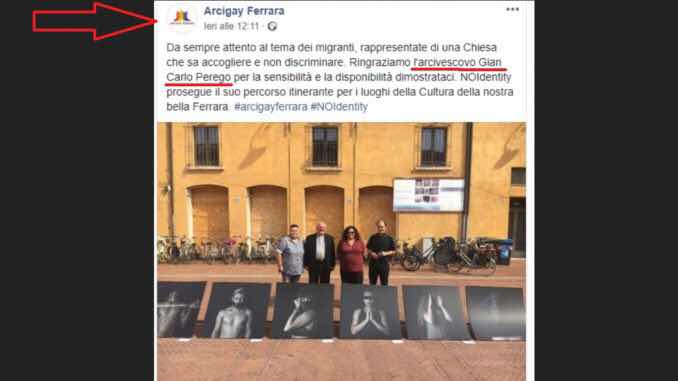 Archbishop Perego of Ferrara, a bishop "to the taste" of Pope Francis: for immigration, Islamophile and homophile.

This is a bishop to the liking of the Pope.

(Rome) Archbishop Gian Carlo Perego of Ferrara was photographed last Saturday together with the aberrosexual organization ArciGay "against intolerance".

Msgr. Perego succeeds Archbishop Luigi Negri. The two church representatives could hardly be more different. Monsignor Negri, Ratzingerianer, advocate of the social doctrine of the Church and associated with tradition, is one of the episcopal figures who stand out from the army of the chief shepherds. He also made himself some enemies. As soon as Pope Francis was elected, his first attempts to take Negri out prematurely began. They did not shy away from dirty methods  The attempts were unsuccessful, but counteracted the work of the Archbishop of Ferrara.

Pope Francis affirmed that Msgr. Negri does not conform to his model of bishop by immediately retiring him at the age of 75.

His successor, Msgr. Gian Carlo Perego, was greeted by the media as a Bishop "to the liking" of Francis. As a former Caritas director and head of the immigrant ministry, Migrantes, the Episcopal Conference, "he is close to Francis," says the Corriere della Sera. How can this be measured, or in other words, by what initiatives was the new bishop noticed so far?

-Relations with the Islamic community

-Food in the church

-Prohibition of criticism of Karl Rahner

-Obstruction of the traditional rite

-Admission of remarried divorced to communion

-and now an action with the largest aberrosexual organization. Archbishop Perego was let himself be publicized for an initiative against the "intolerance" of the "homonormative". The natural order of marriage between a man and a woman for the purpose of procreating and educating children, the family as a basic cell of society and of the state, is therefore only a "homonormative intolerance" - and the Archbishop joins in.

"Always attentive to the theme of immigrants, representatives of a church that accepts and does not discriminate".

Here, too, Msgr. Perego demonstrated his break with his predecessor, who kept aloof from organized homosexuality, criticized "gay marriage," the persecution of Christians by Muslims, and the Islamization of Europe.
The new archbishop, on the other hand, was commemorated on the main square of his episcopal city, together with representatives of ArciGay, in front of a picture banner bearing the inscription: "Against homophobia". The occasion was a photo exhibition organized by ArciGay on "NOIdentity - True Stories Human Stories". The exhibition shows aberrosexuals how they like to present themselves in public: as victims.

Time for the gay lobby, but not for the families

The exhibition as well as the action with Archbishop Perego is part of a campaign to promote homo and gender ideology.

ArciGay is a front organization of the gay lobby. It calls for the introduction of "gay marriage", "surrogacy" and "anti-homophobia laws", the implementation of which would mean the end of freedom of expression and [public] religion. Statements such as, a child has a right to a father and a mother, would already be a punishable "hate speech".

The teachings of the Church do not reconcile the objectives of ArciGay. The only connection, if any, is the quirky fact that the founder of ArciGay was a Catholic priest.

The appearance of Archbishop Perego blends with another event to a dubious picture. Ten days ago, on 16 September, the Archbishop made known his absence on his Diocesan Day for the Family.

The bishop does not go to the families, but to the aberrosexual? Who is this bishop? Such and similar questions currently concern devout Catholics in the Archdiocese of Ferrara.

The archbishop will have missed the family day for good reasons. If he finds time for a photo session with the gay lobby six days later, however, the look gets a bit of a bump.

One of the duties of a pastor is to speak with everyone, not for the sake of speaking, but to bring them to Jesus Christ. Making oneself available as an advertising medium for aberrosexual propaganda means the exact opposite.

So far, no initiative has been announced by Archbishop Perego, a bishop "to the liking" of Pope Francis, for persecuted Christians.

I copied this headline from the newspaper "Business Insider".

This is unbelievable. If you think about this quote from Francis, it is outrageous and makes HIS situation a thousand times worse. "everyone used to cover up crimes", huh Pope Francis? So that makes it ok? So that makes all these scumbag bishops....you at the top of the list....all correct and moral? Don't you have a sense of sin, asshole?
After saying something like this, which is his attempt to justify 50 years of coverup of homo priestly perverts in the Church, Pope Francis should be run out of the Vatican, along with his cadre of gay and pro-gay bishops and clergy.
What kind of church has this become, that the "good" Cardinals don't stand up to this guy and force him out. Tyrants, dictators, murderers, lunatics, were all thrown out of seats of power over the last 50 years in countries like Russia, Romania, Yugoslavia, Uganda, Cambodia, etc.
It's time for all good Catholics to throw out the garbage.
If nothing happens, and Francis stays on and goes about as if nothing happened and covers everything up again, then this "Catholic Church" isn't worth the paper what people use to line their trash cans with.
Better for a "church" like this to go out of existence.....or faithful people try to start up the real Catholic Church and real papacy somewhere else.

This is more shadow boxing that will have no effect other than finally enervating the one throwing the punches. Right now the Trad/Conservative sector of the Catholic Church is in a state of confusion, disarray, depression and unfocused rage. People are coming apart at the seams and increasingly they are grasping at the straw of negativity that is sede-vacantism or some other form of disengagement or alienation from the mainstream. This state of affairs is not helped one bit by the flagrantly opportunistic, self-referencing and vested interests of some disingenuous manipulative bishops, priests supported by big money in those ideological organisations that care more about themselves than the faith of ordinary people. They are the ones who deserve most of the blame for the splintering and lynch mob behavior that is going on at the moment.

Would you rather we were regimented and mechanized like a 1930s political movement?

You're digging in the wrong spot for the real issues and the ponies you have put your money on are bred for shows nothing else.

Who did you put your money on, Timothy Leary?

Vigano explosion #II yesterday is likely to be just as damaging to Francis as #1 . All the more reason why he should be pressured out of office....not to mention the China fiasco. The only friends he made were with the Communists. The Chinese Catholics feel betrayed....they hate him (Francis). Good riddance.
So much for Parolin, the architect of the China deal, becoming pope like he wanted to, and even had a few progressive Cardinals lining up for him to replace Francis....a "Francis II" pontificate.HAHAHAHAHA. All the Francis favorites are ruined men with no hope of reaching the papal office. "Pope" Maridiaga? Don't make me laugh. And he wanted it so badly!
With the "Der Spiegel" article, even more people are coming out against Francis.....probably an even 50% or more of his Curia.
Best thing for him to do is to pack his bags and go. He can say that he's retiring for health reasons. Like Benedict XVI did.
Benedict XVI had no health issues. He read the dossier about all the queers, panicked and ran. That's all. He's still mentally fit today and could still be Pope. Popes don't need to travel. John Paul II spent half his pontificate traveling and it accomplished nothing.
Best thing is, force Francis out and elect a Catholic. And if they're stupid enough to elect another "Francis", then good Catholics get the support, find a great place to build the Church all over from, elect a CATHOLIC "substitute" Pope, and start all over again, and keep going until the Vatican returns to the True Faith...the one it held to up until 1962! :)

I thought McCarrick was the architect of China deal!

I read it was Francis and Parolin's baby, but I also read that McCarrick was sent by Francis at least once to China to smooth things out for the deal.
Either way, it's a betrayal of nearly 70 years of faithful Catholics suffering for Catholic truth and loyalty to the Pope. The ONLY pope who acknowledged their suffering, and who stood arm in arm with them was the late, great Pope Pius XII who openly condemned the Chinese Communists (and communism everywhere), and the so called "patriotic Catholic Church". He and Pius XI appointed many Bishops to China who suffered imprisonment for the Faith 1949 onward.
But to Francis and company, their suffering means nothing. Better to be cozy with the leftists/radicals/Communists than with the faituful cATHOLICS WHO SUFFER UNDER THEM.....
You described yourself, Francis, as 'the devil'. You ARE, IN MORE WAYS THAN ONE.

Damian's 'reading' is the new indefectible Magisterium. Congratulations.
You are totally out of your depth young fellow. No wonder you were less than satisfactory as an history teacher having consistently substituted your own ideological narrative for truth.

You always come up short whenever you’re crossexamined, but just what historian doesn’t have an ideological narrative?

A good historian enjoys a finely honed 'hermeneutic of suspicion' especially with regard to his own ability to judge with equity and he/she would have no fear of arguing their positions in the company of their fellow historians.
Damian has no method, no controlling checks and balances that would cause him to question. The validators of his own 'historical' analyses are 'I read'; 'all Italians hate the Pope and told me so' etc. He's all talk and no trousers and his 'history' is not worth a cracker.

I know what I mean and I mean what I say. Try it sometime.

No one else knows what you mean, perhaps not what you intend to say.