Excommunicated Priestesses Invited to the Vatican? 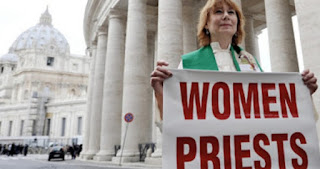 (Rome) last Friday to representatives of militant women's association Women's Ordination Worldwide (WOW) have been received in the Vatican. The organization calls for the introduction of women to the priesthood by the Catholic Church.
According to a WOW spokesman, the excommunicated Pole, Janice Secre-Duszynska, she had been received by a "senior official" of the Vatican Secretariat of State, together with other WOW "priestesses". They wished to leave a petition with which they begin a dialogue and the lifting of the excommunication against persons called by Pope Francis, who work for women priests in the Catholic Church.
Ambiguous wording of Pope Francis may have been conceived as "openness" to several controversial issues. But women priests are not part of his agenda. Pope John Paul II had uttered with the Apostolic Letter Ordinatio Sacerdotalis  in 1994, a definite no to women priests. His affirmation of the sacrament instituted by Christ is considered canonically a pronouncement ex cathedra. The dogmatic character leaves the question out of further discussion.
Last month, however, Francis announced towards the Superiors General of Catholic women religious that he wanted to form a commission to study the role and task of the early Christian deaconesses. The deaconesses of antiquity had no part in the sacrament of Orders, they were not ordained female deacons. Feminist and progressive Church circles have focused, since Ordinatio Sacerdotalis, increasingly on the "women's diaconate" on the grounds that John Paul II. may have indeed explicitly excluded women priests, but not  women deacons. Of this quibble the defender of the Sacraments spoke: There is only a sacrament of orders, which can not be split.  John Paul II had affirmed what the Church has always taught that the sacrament, no matter at what level, whether deacons, priests or bishops, is reserved for men.

Women's Ordination Worldwide (WOW) is part of the radical feminism, which despite Ordinatio Sacerdotalis adheres to the demand for the female priesthood.The organization is therefore not considered as part of the Catholic Church. Their representatives are excommunicated, ie, excluded from the community of the Church.
Pope Francis celebrated from 1-3  June as part of the proclaimed by him Holy Year of Mercy, the "Jubilee for Priests". 6,000 priests from around the world gathered with the Church leader at the Vatican and conversed with them a retreat.


In parallel,  WOW organized an "anniversary of the priestesses", which occured in "International House of Women" in Trastevere, which would have been completely ignored had it not been for the anti-Church and supercritical activism safely assured it of knee-jerk media attention.
The "International House of Women" is a former monastery that was left vacant in 1987 became occupied by the Movimento femminista Romano   (Roman Feminist Movement). Since 1992 the establishment has been financed by  the Roman city left-governments and other left-governed institutions. Developed in the late 60s, the radical feminist movement demanded and promotes the killing of unborn children and homosexuality.

Last Friday, some women gathered in front of Castel Sant'Angelo, who claim to have been ordained to as "priestesses". Since women have no part in the sacrament of Holy Orders, they are mere consecration simulations without any validity. From Castel Sant'Angelo, the small group moved to St. Peter's Square, where they initially had his picture taken with protest signs  against the backdrop of the St. Peter's Basilica. Then the women went into hiding in the crowd of faithful who streamed into Saint Peter's Square to participate in the Holy Mass on the anniversary of the priest.
"There are now 200 worldwide priestesses. The majority of them are located in the US," said Christina Moreira for AFP, who claims that she was ordained last year in La Coruña in Spain.
Although the "priestesses" of WOW do not believe that there will be priestesses in the Catholic Church in the foreseeable future, 'they applaud the change in climate  which took place in the Church where it now - as they say - is no longer, as formerly, forbidden is to address such an issue," said AFP.

The WOW is one of several groups that call for women's access to the sacrament of orders as deacons, priests and bishops. The requirement goes back to the Church 68 movement. The first organized group was formed in 1975. The organization Roman Catholic Women Priests (RCWP) organized the consecration in 2002 of an ordination simulation of several women by an "independent bishop" whose apostolic succession is as vertiginous as the entire staging of the consecration.
In 2007  the Roman Congregation ruled, with the approval of Pope Benedict XVI., that all are  excommunicated, who attempt to procure the sacrement for a woman, and every woman is excommunicated for attempting to acquire the sacrament. Thus the excommunication applies latae sententiae for comparable organizations like WOW.
The emergence of WOW led to the excommunicated Austrian Christine Mayr-Lumetzberger, a former Benedictine. WOW was founded in 1996 in the "First European Women's Synod" in Gmunden, Upper Austria. The aim of the "ecumenical" organization is the implementation of "women's ordination" in the Catholic Church.
The imitation of the priesthood, the speech is also of mimicry, imitating the followed "Jubilee of Priests". In July WOW wants to take part in  World Youth Day in Krakow itself.

Networking among non-Church and within the church circles

If organizations like RCWP, WOC and WOW are outside the Catholic Church, the transition to the left wing of the Church is not exactly defined. The thinking of these organizations extends into Church circles in no small measure. Proof of this is panel discussion event organized on June 1st  at the "Casa Internazionale delle Donne" for the  20th anniversary of WOW.
Participants were: Tony Flannery, an IRISH redemptorist  suspended from the priesthood, who was condemned by the Vatican for disseminating heresies (abortion, homosexuality, women priests); Dana English, pastor of the Anglican Church in Rome; Jamie Manson, a columnist for the progressive US magazine National Catholic Reporter and Marinella Perroni,  professor of New Testament at the Pontifical Athenaeum of Saint Anselm, the Benedictine University in Rome.


Marinella Perroni, because of her teaching position at a papal university and other ecclesiastical projects, the only real "Church member" in this round, is convinced feminist and gender theologian. Perroni raves for the "pluralistic world" and for representatives of Marxist liberation theology. She sees gender as the "interpretive key for the historical analysis". Perroni found no words of praise for Benedict XVI.   He had been guilty in her eyes of having "worked forcefully against gender theory" and "designated homosexuals as enemies of peace."  Perroni is a member of the governing body of the abortion favorable Fraueninitiative SNOQ. This woman initiative originated in 2011 in the orbit of the political left against the then Italian Prime Minister Silvio Berlusconi, whom they accused of "sexism."  SNOQ claimed the killing of unborn children as "women's rights". For the gender Theologian Perroni this was obviously no problem.
In June 2014 was Perroni was speaker at a meeting of the Grand Orient of Italy 's "The Secret Council - Second Vatican and Freemasonry". Perroni belongs to the intellectual milieu of those to whom the faithful and vocation-strong Franciscan Sisters of the Immaculate were delivered, who were placed, just like the male religious branch  under the provisional control of the Congregation of Religious.
Text: Giuseppe Nardi
Image: WOW / MFR / MiL (screenshots)
Trans: Tancred vekron99@hotmail.com
Link to Katholisches...
AMDG
Posted by Tancred at 1:19 PM

I ask this in all sincerity and not one bit of sarcasm.
Do you all realize eventually there will be females 'celebrating' and 'offering' the immemorial mass of all ages in the official parish structures?

No. Because they can't. What you say is not actually possible in real terms.

In a spiritual Catholic sense you're correct and I agree with you.
With that said,I am convinced in 10 years or so it's going to be happening. Even though I am not Novus Ordo,I hope everyone is laughing at me in 10 years.I hope I am wrong as wrong can be.