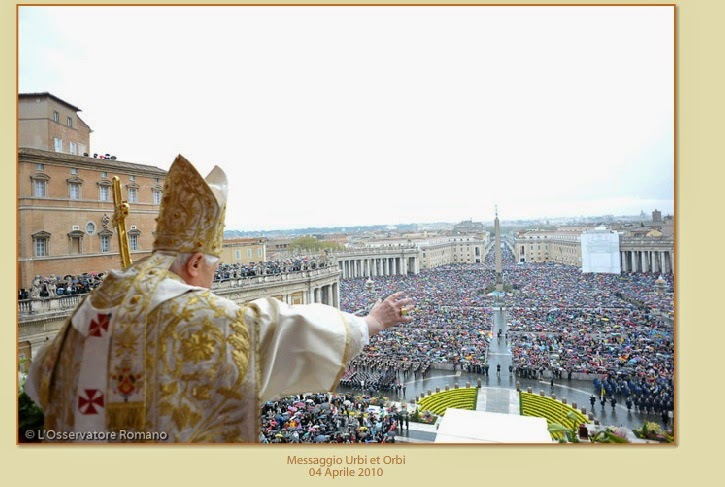 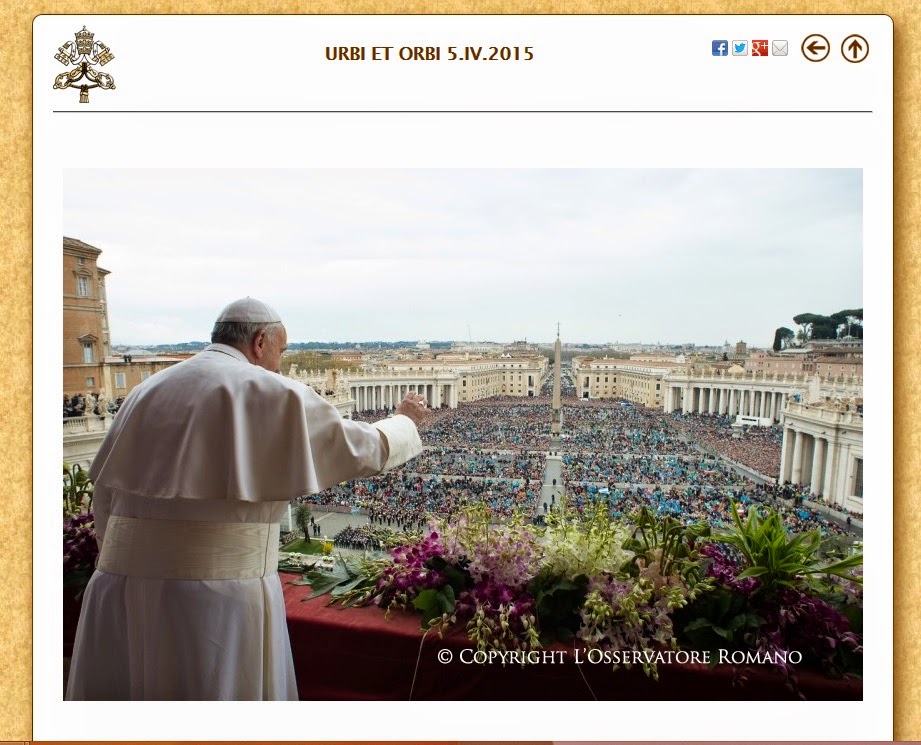 Perhaps they are all using the free showers recently installed?

While Socci's remarks are ambivalent, even coded perhaps, he does not make a comparison between the 'light' crowd in St Peter's piazza for Francis compared with the enormous gathering of people in Manila for the papal Mass there.

"One can question the usefulness of such a comparison. More should take care not to try to interpret into it too much.The pictures should speak for themselves."

Maybe it's my eyes. Are the crowds for Benedict obviously larger?

The photos are different; they are not the same perspective as can be seen from the buildings along the side. No comparison can be made, unless one is prepared to zoom in on the first. Then they are similar.

Yes, similar, but some eyewitness said that the place was half empty and the same is on Wednesday' audiences.....the 7 mln.people in Manila are a fake, maybe the show isn't attractive anymore

Travelong wasn't so easy then either. And nobody was sitting. Maybe because the chairs took up too much room. LOLOLOL

Who are the 'some people?' Can they support their claim with hard evidence or is this just another loaded assertion?

To Real Pope,Real Saint:
You photo speaks a thousand words! Pius XII was a saint, a true Catholic Saint....not the saints of convenience the Vatican has made of some people, such as John XXIII and John Paul II, and now "Blessed" Paul VI. Even though JOhn Paul II was a holy person, he was not a Saint in the classic Catholic sense as was Pius XII. Moreover, the push to have him canonized so quickly, less than 9 years after his death even smacks on an abuse of the whole system to push him and a certain Vatican II agenda though.
My friend who is a young nun in an Italian Order whos has their Motherhouse in Rome has told me many times of the declining popularity of Pope Francis in Italy, and of the disappearing crowds there for him.
The new scandal he is involved in.....washing the feet of a transgender man among others on Holy Thursday last week is causing him major trouble and embarrassment in the Vatican and Italy. So there should be no surprise the crowds are fewer.
In the Philippines, the 7 million people (probably less than that actually), did not come out for Pope Francis and his agenda....rather they came out for "the Pope", which is a normal Catholic reaction.
If they knew what he stood for (which they don't), there would be far less.

Socci is reliable, and if it were you, I'd know whatever you reported was false.

Apples are red and oranges are orange. Please explain what meaning your proposed comparison has.

Popularity in a heathen, anti-God world is not a sign of conversions to the true Faith and a moral life.

I zoomed in and cropped the Bergoglio photo. I also ran it through deblurring software, as its focus is not as sharp as the Benedict photo. They're not similar. Benedict really has the denser crowd.

Have you ever heard of NRC Online? You might feel more comfortable there.

It's not hard to understand why the crowds in Rome are already tiring of Pope Humble. Modernism grows old quickly. Yes, there was a brief surge when he first washed the feet of homos, transsexuals, and Muslims, but novelty always has a short shelf life and Mr. B is no different. My big fear is that he's going to realize this and decide he must do something wilder and crazier next year to regain the attention of the masses.

It's also not tough to understand why the crowds have been dwindling in Rome for another reason. For all of his faults, Benedict at least tried to look like a pope. Bergoglio, on the other hand, just looks like a fat man in white who can't stand the symbols of the position he holds. This may come as newsflash to some, but people respect signs of authority and tradition. It's why the British monarchy is well liked and it why people stop and stare when Air Force 1 is at their airport. Riding around in a beat up Yugo and wearing an old polyester painting smock as a chausible inspires no one.

So true. It's as if he can only stand the bare minimum needed to be recognized as the pope. He won't live in the papal apartments at the Apostolic Palace where all previous popes lived. His cross is not even a crucifix. Perhaps he accepted the office only to push an agenda?

You got it. That's why he's there. Kasper and company had it all planned. They forced Benedict XVI out, and hijacked the conclave.

I'm seriously beginning to wonder if he'll decided to abolish the title of "Pope" all together. He's made it clear he prefers Bishop of Rome so it would surprise me to learn he decided that's all he is. Essentially, he'd turn the papacy into what the Chief Justice of the Supreme Court in the US is. First among equals with certain administrative rights.

If Pope Francis came to my town, you couldn't. pay me to go see him,

Stop acting like the sage of the hair salon who bombed grad school at Georgetown in the 60s, act like a Christian for a change.

Its the same picture. They just put some poinsettias in front of the obelisk and superimposed Francis over Benedict.

Well to be honest you could pay me. It would have to be worth my while, something like $600. I wouldn't listen to anything though, I'd just put on my headphones and jam to some music he flapped his gums.

"Loaded assertion?" You sure come up with some bizarre neologisms, Gaybriel. An assertion cannot be loaded, as it is either verifiable or unverifiable. You are probably thinking of the phrase "loaded question," the phrase itself being maybe a corruption of "leading question." I hope my advice helps you before you embarrass yourself at the next MLA circus.

I know exactly what I wrote and I wrote what I meant. I suggest you enrol in an ESL course.

HAHAHAHAHAHA! That's all Bergoglio knows how to do, flap his gums.

Did you ever hear him give a homily? He doesn't even sound Papal. Granted, the majestic Papal language and the Papal "WE" has been gone for a long time, but Benedict XVI at least looked and sounded like the Pope when he spoke, His written speeches still had a papal style.
Bergoglio sounds like a pastor at a paish (and not necessarily a Catholic one).

I knew something strange was going on when I heard that Benedict was going to resign. The first pope in 600 years to do so. It does seem like it was all pre-planned.

Cue: Gaybriel crosses arms, let's out an annoyed "humph", and stomps out of the room.

"I know exactly what I wrote and I wrote what I meant."

Nice little display of solipsism there, Gaybriel, indicative, IMHO. of a certain deep-seated developmental disorder. Maybe you should find yourself a priest who can refer you to an appropriate professional in a certain health care field, and I'm not talking veterinary. Haven't you been wondering why everyone argues with you, why you think no one is as smart as you, and how it is you know what everyone is thinking?