Cardinal Kasper Distorts the Church Fathers, In Order to Allow Divorced and Remarried to Communion 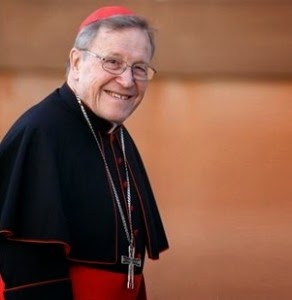 (Rome) Another theologian explained that Cardinal Walter Kasper Cardinal at the consistory in late February distorted the Church Fathers and manipulated quotations to justify the allowance remarried divorcees.
According to the Prefect of the CDF, Cardinal Gerhard Müller, according to the former President of the Pontifical Committee of Historical Sciences, Cardinal Walter Brandmüller, according questions about marriage that John Paul II's most esteemed theologian on matters of marriage and the family, Cardinal Carlo Caffarra, according to a leading canonist of the Roman Curia, Cardinal Velasio De Paolis and according to Cardinal Thomas Collins, a "rising star in the College of Cardinals," says Vatican expert Sandro Magister, and now also took one of the most important voices of the Australian theology, Adam G. Cooper, member of the International Association for Patristic Studies even made a statement.

Cooper dismantled Kasper's "Theorem" and disagreed with the assertion of the German emeritus Cardinal that there is a possibility to allow remarried divorcees to receive Communion. A thesis advanced by Kasper at Cardinal Consistory from privileged position allowed by Pope Francis  with a view to the October 2014 and 2015 Synods on the family.
In a lengthy essay in a respectful, but unambiguous tone that was published by the Catholic World Report , patristics expert examined the quoted Cardinal Kasper in support of its argument places of the Church Fathers: Origen, Basil, Gregory of Nazianzus and the Canon 8 of the Council of Nicea.

"Unfortunate that Cardinal Kasper, has distorted the testimonies of the early Church"

Cooper can prove that none of the references cited by Kasper's points can infer admission to  Communion for remarried divorcees. Cooper's conclusion reads: "It is unfortunate that Cardinal Kasper has distorted the testimony of the early Church to this extent for a pastoral solution he seems to represent". For the overall question, says the Australian theologian,  the subject is complex and is not to say that there are answers exactly  to the problems of today which must follow from what stands in the writings of the Church Fathers. These can not derive  in any case  an admission of remarried divorcees to Communion. But this breaks down the whole argument of Cardinal Kasper, who justified his thesis in a misleading manner by reference to the Church Fathers.
Text: Giuseppe Nardi
image: Timone
Trans: Tancred vekron99@hotmail.com
Link to Katholisches...
AMGD
Posted by Tancred at 9:39 PM

Cardinal Raymond Burke, Prefect of the Supreme Tribunal of the Apostolic Signatura, can be added to the list of those Princes of the Church who oppose Kasper's infamous proposal: https://www.youtube.com/watch?v=Tf7AdXjdT1k

I'm so confused why Kasper, with such
A high position is allowed to continue with this? My wife, who is on her way to becoming Catholic keeps asking me why men like Kasper who obviously speak heresy, why are they allowed to continue?
All I can say is "the church has always had its Judases".
Even or pope is saying crazy, uncatholic statements!
I'm so confused...

There is no confusion in the Traditional Latin Mass, the catechism, and the rosary.

There is no confusion in the unchanging and unchangeable Deposit of Faith, and the Divine Law. The Church is Our Lord's and the Faith is protected by the Holy Spirit but there has been a Great Apostasy which started among bishops and priests. The apostasy came from the top down. The Church, particularly its seminaries, was infiltrated by Her enemies in the first half of the 20th century. Find orthodox priests, and stay close to the sacraments, and pray for the Church, the Pope, and all souls. Find other true Catholics, and support one another in this time of great tribulation. God bless you.

Thanks Lynda.
Currently my wife and I 1.5 hours every Sunday for an 8am TLM every Sunday.

Since my company decided yesterday to lay off me and my entire department and send our jobs to India I'll now have time for 6am daily TLM.
Blessings I suppose can be hidden.

You're in my prayers, my dear brother in Christ. I may lose my home soon as I cannot pay my mortgage due to debilitating ill-health.

Yet we live in the church of whatever feels right at the present moment goes and the wirst offense is someone's "feelings" getting hurt.

If God permits evil, then should we be surprised that Francis does, too?