More “Reforms”: Will Ecclesia Dei Be Devoured By The Congregation of Religious Too? 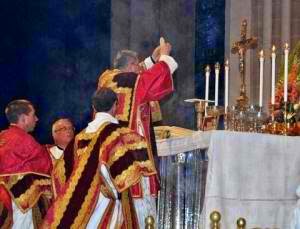 (Rome) The well-known website Rorate Caeli wrote that in 1988,  the Pontifial Commission Ecclesia Dei established by  Pope John Paul II could be dissolved in the course of reform of the Curia taking place under Pope Francis.   It’s a message that caused some excitement in the communities  faithful to tradition. The background forms the distance of the Argentine pope to tradition. Since taking office, Pope Francis has made gestures in a variety of directions, most recently in the Vatican Gardens  towards Judaism and Islam, in his discussions with Eugenio Scalfari also towards atheists, agnostics and Freemasons, while Catholic tradition has he largely ignored.

Papal Astonishment that Catholic Youth is Attracted to the Old Rite

Some cryptic formulations were even interpreted as a swipe against tradition. A general lack of liturgical sensibility seems in addition to hinder Pope Francis’  access to the Old Rite. Compared to the Apulian bishops, he reaffirmed last year, however, that the two forms of the rite should co-exist and be mutually reinforcing. Speaking to the Czech bishops, the head of the Church expressed surprise in the spring of 2014 expressed surprise that  Catholic youth are attracted to the Old Rite.
The Pontifical Commission Ecclesia Dei was created in 1988 to accommodate parts of the Priestly Society of St. Pius X. catch who did not want to go with “State of Emergency" illicit episcopal ordinations. Since then, the Commission is responsible for all old ritual Communities and orders in the Catholic Church. They thus have direct contact to the Roman Curia.

CDF: Does Lack of Agreement with the SSPX to Decoupling From Ecclesia Dei?

Congregation of Religious - “Worst of the Worst" Variants

Since the news broke, that Pope Francis is  going  to dissolve a number  of papal councils, merge, or incorporate others, there is concern that   on this occasion they could be manually applied to those facilities in which tradition is of an institutional and therefore recognized framework in the Church. This makes especially the "worst of the worst" variants (Messa in Latino) in the traditional circles, namely the decoupling  of Ecclesia Dei from the CDF and the integration into the Congregation for Religious.  The dissolution of  the Commission is considered unlikely. The question of integration is seen as an indicator of "benevolence".
The presentiment that the leadership will go to  Cardinal Prefect Joao Braz de Aviz, a remaining appointment  from the time of Benedict XVI. (2011),  and Secretary, Curia, Archbishop José Rodríguez Carballo, OFM,   an equally unfortunate appointment by Pope Francis (2013), has left  traditional Catholics who are certainly not Cassandras, but have a high threshold of pain, in some anxiety, because of the unspeakable dealing with the Order of the Franciscans of the Immaculate.

The Amazing Zeal of an Inertial Congregation

The Franciscan religious order founded by Father Stefano Manelli  broke two taboos. It changed from the New Order, as such, ( he is subject to the Congregation of Religious and not Ecclesia Dei), from the New to the Old Rite. A step that it also associated with an in-depth engagement and public confrontation with the Church crisis, its causes and in this context with the Second Vatican Council. The male branch of the order was placed  under provisional administration in July of 2013, and a a Visitator for the female branch was appointed in May 2014 and the lay community affiliated with the Order was also suspended. In contrary to the existing Church law the Order of the Old Rite was banned. The priest must individually apply for a permission to celebrate the traditional Mass. To ensure that the female branch of the order was severely impaired, although initially excluded from direct action because the Franciscan Franciscan Sisters are no longer allowed to participate Holy Mass in the Old Rite. The fact that the sisters wanted to maintain the Old Rite, did not move  the leadership of the Congregation at all.
However, Rome is not only this variant of the inclusion in the conversation. There is the inclusion of  the CDF in that. Pope Benedict XVI explicitly employed it with a view to a return of the SSPX into unity with Rome.  Yet this seems to have exhausted itself where the talks between the Holy See and the SSPX remain inconclusive.

Besides the possible "worst" variant, the inclusion in the Congregation of Religious,  there is also discussion of integration into the Congregation for Divine Worship. There since 2008, Cardinal Antonio Cañizares Llovera has officiated in the  Curia. It’s an office which could still be exercised for some years by the 68 year old Spaniard. However, there have been persistent rumors  since the election of Pope Francis   of his dismissal.  Indeed, Cardinal Cañizares is the only one of nine prefects of the Congregation, about whom Francis has still taken no decision. Originally, should he be sent back to Spain,  and according to his rank it would only be possible to appointment him as Archbishop of Madrid.  In contrast, there are again some reservations in Spain, where with such an option which no one had anticipated, where an internal succession and local solutions are under discussion.
Regardless of the unresolved question of the Prefect, the annexation of the Commission Ecclesia Dei to the Congregation for Divine Worship would be a  feasible and acceptable solution for traditional circles. The Congregation has very well trained staff with "high liturgical sensibility" (Messa in Latino) and excelled in the past few years mainly due to the sound and quick response to pending questions. Compared to the Congregation for Divine Worship all other congregations act cumbersomely. The special zeal of the Congregation of Religious in the damage of the Order of the Franciscans of the Immaculate represents a marked exception, which makes matters even more difficult.

How is Pope Francis decide?

How is Pope Francis decide? What his C8 Kardinalsrat recommend? Pope Benedict XVI. aimed to lead the two forms of the Roman Rite to actual equality in the Church. A counter-revolutionary act of the first order, the scope of which, few are aware of in the Church  today, however, some high-ranking enemy was aware of it and it has been  counteracted by Francis Pope personally. In his understanding is Summorum Pontificum and following the instruction Universae Ecclesiae it is only as a gesture of paternal accommodation to a small minority in the Church.  No less, but no more. As such, he sees and accepts the step of Benedict XVI. The question of whether he would ever take such a step himself, is ultimately a useless intellectual exercise.
Text: Giuseppe Nardi
image: Accion Liturgica
TransL Tancred vekron99@hotmail.com
Link to Katholisches….
AMGD
Posted by Tancred at 9:04 AM

'
"Pope Benedict XVI. aimed to lead the two forms of the Roman Rite to actual equality in the Church."

If ever there was a "half-truth", this is it. Benedict XVI intended to hybridise both, ultimately leaving one rite. This was not counter-revolutionary at all.