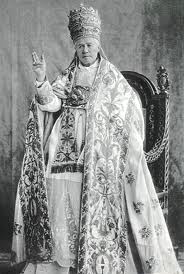 Deo volente he'll recommend the Catechism on Modernism next. ☺

Thanks for the link, very useful!

"Catechism of the Council of Trent" was promulgated by Pius V (5th), not Pius X (10th).

All of our Popes want us to know our Faith. We have the responsibility to educate ourselves - no excuses.
The Magisterium of the Church has provided us with the tools we need.

"St. Pius X saw with clarity how religious ignorance not only leads individual lives, but also to the decay of society and a lack of balanced thinking in the most serious problems."

“ The Catechism of the Catholic Church, which I approved ... and the publication of which I today order by virtue of my Apostolic Authority, is a statement of the Church's faith and of catholic doctrine, attested to or illumined by Sacred Scripture, the Apostolic Tradition and the Church's Magisterium. I declare it to be a sure norm for teaching the faith and thus a valid and legitimate instrument for ecclesial communion. “ – Pope John Paul II. (CCC pg 5)

“In this Year of Faith let us ask ourselves if we have actually taken a few steps to get to know Christ and the truths of faith more, by reading and meditating on the Scriptures, studying the Catechism, steadily approaching the Sacraments.” - Pope Francis, May 15, 2013.

For more quotes from our Popes regarding the CCC - on the net go to: "What Catholics REALLY Believe SOURCE"
http://whatcatholicsreallybelieve.com/

Thank you. I have sent an email question to EWTN asking them what the Catechism of Pope Pius X (10th) is.
Will get back with answer if I get one within the next week or so.
Please see my posts below asking for clarification.

The Catechism of Pius X was a small catechism issued
by Pope St. Pius X.

This article did not say That the Council of Trent
Catechism was promulgated by Pope St. Pius X. I'm just a reader of this blog. But I think I read this
Post correctly.

I'm not sure what all the didacticism is about.

Not all popes want us to know our Faith. Some only want us to know THEIR version of our Faith. Maybe the reason is that they do not know the Faith themselves. Or worse, they know it yet attempt to create their own "faith" by inserting utter nonsense, heresy and pure evil. The false catechism of JPII is the one I have in mind. It is riddled with falsehoods, distortions, nonsense and absurdities such as the Moslems worshipping the same God as Christians. Insanity! I bought the Conciliarist catechism when it came out because I understood that it was being promulgated in order to actually stop the heresies and lies. Well, I read it and tossed it into the garbage. It was the same with their New American Bible. Filled to the absolute brim with distortion and lies. Quite intentional of course. Claiming that St. Matthew did not write the gospel attributed to him? And that was just a preface! That book got what all false bibles and bibles with transcribe errors get...fire. It got the burn barrel in my backyard.

EWTN has this Catechism in their library: http://www.ewtn.com/library/catechsm/piusxcat.htm