The discussion of Sitting Bull deserves an addition.  Sitting Bull was a fascinating and successful War leader of the Dakota people who gave the US Army one of its few decisive defeats in the Indian Wars, by massacring General Custer and his cavalry squadrons at the Battle of Little Big Horn.   There is a famous picture, which was cropped, to conceal the crucifix he wore.  This was pointed out by the Canterbury Tales Blog, here. 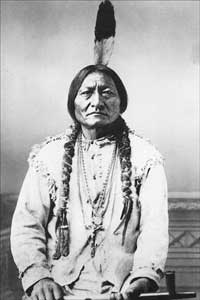 One thing this begins to indicate, but will be more clear later on, is that the Dakota Indians preferred the Catholics to the other denominations, often foisted upon them by the federal government at their expense.  In fact, a local historian and priest, Father Berghold, offers the compelling thesis that the Indians would have been much more peaceful if the Catholic Church had been allowed to care for them as they'd often requested. As he writes:


One is also reminded here of the fascinating Medicine Man, Black Elk, who also became a devout Catholic and catechist in his time. It is Father Berghold's book, "The Indians' Revenge" which describes in graphic detail the horrors of the Sioux uprising.  It is not a politically correct book, but it is very sympathetic to the Indian and critical of the Federal Government's treatment of him, as well as the puritanical hypocrisy under which the Natives suffered by being forced to follow the exterior conventions of American Protestantism.

In 1862 several bands of Dakota, starving for want of food and the failure of that year's hunt, left their Reservations throughout the Midwest and attacked white settlements, especially New Ulm where nine hundred settlers resisted for three perilous days of hard fighting. The Sioux Uprising of 62 was also known popularly as "Little Crow's War", after its primary instigator. The war ended in December with the capture of many of the offenders, some three hundred of whom were initially sentenced to die, but Abraham Lincoln reduced the number, and on the day after Christmas of that year, on the Feast of St. Stephen, 39 Indians were to be hung.  The condemned men were offered the services of a religion of their choice and 36 of them chose to become Catholics.   Many of the condemned men wore crucifixes, religious medals and crosses.  As the Austrian Priest describes it:

According to the principles of our free institutions every one of the condemned was at liberty to choose the religion in which he wanted to die, and they were officially notified of the fact. The Government also offered to procure the spiritual advisers of their choice. Strange as it may appear, thirty-six out of the thirty-nine became Catholics, though they had always been under the spiritual guidance of Protestant ministers who, as has been said, were in the employ of the Government for years past at the different agencies. Their Catholic spiritual adviser was the Rev. Father Ravoux, who is at present attached to the Cathedral at St. Paul as Vicar-General of the diocese.* Martial law was proclaimed at Mankato by Stephen Miller on the 24th of December, and
* The different Indian tribes who, some years ago, held a great council with the representatives of the Government also wanted only Catholic priests, a fact which was reported in every paper throughout the country [Ibid, p. 146]

Yes, Sitting Bull preferred the Catholic Church -- he may very well have been baptized in his youth. But he was barred from ever formally entering the Church. And the picture was not cropped. There are a number of pictures, some with and some without the crucifix. See here: http://catholiclane.com/was-chief-sitting-bull-a-catholic/

Sitting Bull had an impediment to entering The Church- two wives. He wouldn't give one up and could not be fully received into The Church. I pray that at least he received some merit for some desire and admiration for The Church before he was murdered.

Thank you for that. It's also what Father Berghold maintains about Sitting Bull. Perhaps his good resolution let to him being saved in the end? His example in this picture certainly is edifying.