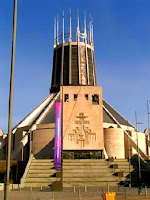 An ad limina visit (Bishops are required to visit the Pope every 5 years) is coming off here pretty soon for UK Bishops and there's some complaining about their performance, something about not doing their jobs. Archbishop Kelly sure has an ugly Cathedral. They paid money for that. Ok, we know that Liverpool has an ugly Cathedral that's really not something you'd expect a church to be. The locals call it the Wigwam. The Clergy is as ugly as the Cathedral and they routinely beat up local priests and laity who ask for the Traditional Latin Mass and Sacraments. If you want the Catholic Faith, forget it, you should pack up your bags and head for Brompton. Damian Thompson's article on the subject is awesome and we hope that someone Romeside reads the despairing testimony from one of Damian's commenters:

That’s an irony, isn’t it? There was a time when traditional Catholic priests were unwelcome in Protestant areas of Liverpool. Now they’re treated like pariahs by their priestly colleagues, who screamed blue murder when there was a proposal to found one – just one – community celebrating the old liturgy. So it didn’t happen.
Posted by Tancred at 4:56 PM