Resistance Against the Pachamama Abomination

Pachamama depictions were burned as part of a rite of expiation.


(Rome) The Pachamama scandal, which Pope Francis not only tolerated in the context of the Amazon Synod, but actively supported, continues to draw more attention  - although largely hushed up by the secular media.  Three current examples: the courageous Catholic who disposed of the idols in the Tiber revealed himself;  Cardinal Gerhard Müller rejected the attempts to justify the showing of the Pachamama figures;  In Mexico, Pachamama replicas were publicly burned as part of a rite of expiation.

The Austrian life protector Alexander  Tschugguel (for all not in the know: pronounced Tschuggúal, in this Tyrolean family name, the ue Diphthong is pronounced ua) was identified as the main organizer of that action, on the 21st of October in Rome, the Pachamama representations  were removed from the church of Santa Maria in Traspontina and disposed of in the Tiber.  Tschugguel also organized the recent march for life in Vienna.  Kath.net conducted an interview with him, which had explained  "that it is something that clearly contradicts Catholic doctrine."  When he saw the rituals in the Vatican Gardens, he had the idea of ​​putting an end to the spectacle and making a journey to Rome.  For disposal in the Tiber the young activist said:

"I wanted to make sure that these idols are no longer used in church and for church purposes.  So, symbolically, it seemed best to throw them into the Tiber.”

Pope Francis had not only tolerated the showing of the pagan goddess Pachamama, but supported it in the Vatican Gardens by his presence, and by his explicit presence in St. Peter's, and finally, just before the end of the synod, by his declaration to the synods.  He told the synod fathers of  the rescue of the figures  by the Carabinieri and apologized to "all" who felt insulted by the action.  The pope did not apologize for the erection of a pagan idol in St. Peter's Basilica and in the church of Santa Maria in Traspontina and for bishops bringing the statue into the Synod's Hall in procession.  There was no question of asking God for forgiveness anyway..

Tschugguel rejects the criticism of his action.  She had addressed neither the Amazon Indians nor against the Pope:

"It was all about making this visible violation of the first commandment impossible.  It is also successful!  At the closing ceremony of the Synod the statues were not there. "

Only now does he confess to the action, because otherwise during the synod everything would have been focused on the persons involved and not on the signal and the message of the action. 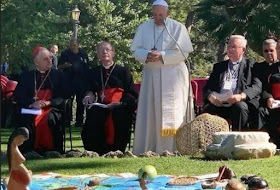 Pope Francis with Pachamama in the Vatican Gardens

"We plan to stand up for these beliefs in the future, but we do not see it as our task to do activism.
Nevertheless, we wanted to give the action a face, because we do not want to hide.  It is important that people again understand the teaching of Christ our Lord.  Then they can face the problems of the world in a sovereign way.  When the Church changes the teaching in favor of the zeitgeist, the faithful lose their hold. "

Cardinal Gerhard Müller, who criticized early on the passing of the pagan idol repeated his criticism in a sermon in Denver in the State of Colorado (USA).  There he attended a priestly meeting last week, where Cardinal Raymond Burke was also present.  The priest Brian Harrison wrote a memoir of the sermon published by LifeSiteNews.

The former faith prefect of the Church found clear words on the recent events in Rome.  The first criticism was the Vatican's lukewarm reaction to the latest column by Eugenio Scalfari in the daily La Repubblica.  In it the Masonry atheist claimed that Pope Francis had confirmed to him that although Jesus had been a "great man", he had not been the Son of God.  The Vatican had denied it, but that happened in a weak way.  Cardinal Muller recalled the words of the Apostle Peter, the first Pope, who
said to Jesus:

"You are Christ, the Son of the living God." 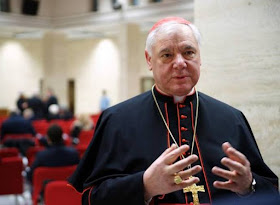 Cardinal Müller had harsh words against the Pachamama spectacle

The Cardinal also condemned the cult-like Pachamama rituals  that had "nothing to do with a true inculturation" with sharp words.   Rather, what happened in Rome was a return to pagan myths rather than a cleansing of Indio culture in the light of the message of Christ.  As Christianity slowly spread in Roman and Greek culture, according to Cardinal Müller, it was endeavoring "not to preserve or revive the worship of pagan deities of the ancient pantheon".  Nor did it try to mix it with the Catholic cult in any way.  Referring to the Encyclical Fides et Ratio of Pope John Paul II, the Cardinal said that Christianity had adopted the best elements of civilization, but only for the one purpose of better explaining and promoting the revelation of God in Christ.

In Mexico City, Pachamama images were burnt last Sunday in front of a central church in the presence of the rector Hugo Valdemar and an exorcism was prayed.  By offering atonement, God was asked to forgive for the sacrileges that were "committed in Rome" in the previous weeks, as stated in the report of a believer present which was published by InfoVaticana.

A month ago, hardly anyone knew the idol Pachamama outside of some Indio groups and neo-Norse circles.  Through the organizers of the Catholic Amazon Synod, it became known worldwide.  Hugo Valdemar is a canon at the Cathedral of the Archdiocese of Mexico City.  He and the faithful gathered for the expiation thought that the Pachamama figures in the Vatican Gardens could make their first appearance in the presence of Pope Francis on the feast day of St. Francis of Assisi.  The idols in Rome triggered a polemic, not least among Protestant free churches, who accuse Catholics of "idolatry" whose end is not yet foreseeable. 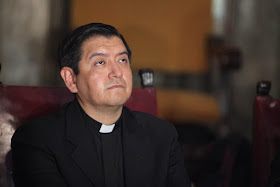 Not a few Catholics were irritated and annoyed by the attempt of synod organizers and the Vatican media to deny or disguise the pagan presence and idolatrous background of Pachamama activism.  In Latin America, you know exactly what you are talking about, because every day the Church is fighting against forms of idolatry and superstition. 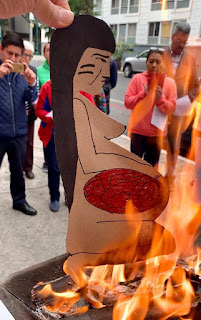 Canon Valdemar was 15 years under Cardinal Norberto Rivera spokesman for the Archdiocese of Mexico City.  He is one of the most famous priests in Mexico.  Above all, he is an excellent connoisseur of the pre-Christian, pagan religions of Central America and knows about the great
efforts of the missionaries, especially the Franciscans, to eliminate idolatry without any ifs or buts.

Last Sunday, the canon referred to Our Lady of Guadalupe.  It is "like a great exorcism, which protects America from idolatry and prepares the way to meet Her Son Jesus Christ.” Many believers have called out to Heaven in recent days because of the confusion publicly and privately.

It is "unbearable" what happened with these "crazy things" in the month of October in Rome and was also experienced remotely by Catholics in America and Mexico, the report says:

"We have the impression that we are experiencing a kind of collective obsession that drives people crazy and darkens their consciousness."

The expiration through the burning of the pachamama figures was for the actions that took place during the Amazon Synod in Rome, but also for the Pachamama prayer of the Italian Episcopal Conference and the Pachamama songs in the Cathedral of Lima.  As for Mexico City, Pope Francis also installed a new archbishop in Lima to initiate a change of course for the local church.

In Mexico City, three depictions of Pachamama were burned.  Canon Valdemar expressed the hope that the atonement and action might be a model for others.  God does not tolerate frivolous dealings with His things, let alone as regards idolatry that violates the First Commandment.

[1] Thanks to my colleague Martha Burger for the hint.