Princess Gloria von Thurn and Taxis is the linchpin of a conservative conspiracy against Pope Francis for the New York Times.

(New York) The New York Times (NYT) tries to give the impression that there is an organized and conspiratorial group in the Catholic Church that wants to overthrow Pope Francis. And at the center would be Princess Gloria of Thurn and Taxis.

If it were another medium, you could break a smile about it. However, the article was published by the New York Times on December 8th, the Feast of the Immaculate Conception. The New York daily newspaper is not only regarded as an influential newspaper worldwide, but above all is the leading organ of the global, left-liberal mainstream.

Their weight can be briefly illustrated by two examples.

The New York Times issued the slogan on the day after the 2016 US presidential election that the Internet, which the same newspaper had praised eight years earlier when Barack Obama was elected, as the ingenious instrument of a new grassroots movement, allowed and spread "fake news" which was the only thing that made the election of Donald Trump possible. A direct consequence of this article is the "Fake News" discussion and the Network Enforcement Act in the Federal Republic of Germany.

Several articles show how much careful attention even in the Vatican, the pronouncements of the New York daily newspaper are listened to. Several times Pope Francis responded to direct calls from the editorial office, and not only in the withdrawal of the cardinal dignity of Theodore McCarrick. 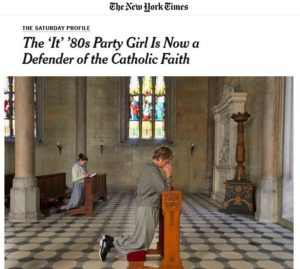 We are talking about Gloria von Thurn and Taxis. Noteworthy is not the distinctively drawn portrait of the princess in residence in Regensburg, but the attempt to whisper a new slogan to the world public.

The New York Times is introducing the mainstream slogan that there is an internationally organized, conspiratorial group in the Catholic Church to overthrow Pope Francis. It is not said that the princess is the head of this conspiracy, but at least its central hub. Her castle is something like the place of conspiracy.

The story sounds familiar and commemorates the inner-church secret circle of St. Gallen, which Cardinal Carlo Maria Martini SJ, who at that time Archbishop of Milan, founded in the 1990s. The difference: the secret circle of Sankt Gallen really existed, while the alleged conservative conspiracy is an invention of the New York Times. Cardinal Godfried Danneels, not suspected of being a conservative, chatted about the existence of the progressive secret circle to his biographers and self-confidently performed a feat in the 2015 book launch, revealing that the members of the secret circle called themselves "the Mafia":


"The group was called 'Sankt Gallen'. But we called it 'the mafia'.” 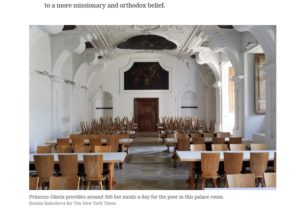 Every day, 300 warm meals are served  in the castle for the poor

Horowitz makes every effort to put the idea of ​​the existence of a conservative "secret circle of St. Gallen" in the reader's and probably especially those minds of the disseminators. In addition, he throws everything arbitrarily into a pot, of which he must certainly be aware.

There is the Princess who invites and collects everything that is against Francis, "conservative and traditionalist Catholics," and of course there is somehow a connection to US President Donald Trump, the archenemy of the New York Times par excellence. It goes on with the former nuncio in the USA, Archbishop Carlo Maria Viganò, with Cardinal Raymond Burke, with the traditional Institute Christ the King and High Priest, although one does not exactly understand how and why, then of course there is Cardinal Gerhard Müller, who prior to his appointment to Rome was Bishop of Regensburg, and even Steve Bannon, the former Breitbart leader charged with the unpardonable "offense," of organizing the successful election campaign of Donald Trump. Bannon is currently trying to repeat his hussar's charge in view of the European elections in 2019. 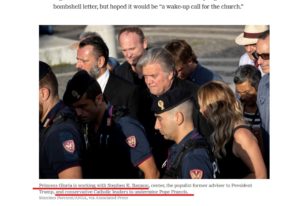 Reporting by the NYT

These ingredients seem to have more the purpose, even to less religiously interested readers, to facilitate the "political" assignment. After all, it should be clearly communicated who is friend and who is enemy, and that the fight takes place globally. No doubt remains as to which side Pope Francis stands or is ranked. The Wall Street Journal wrote in late 2016, when the first shock over the Trump election victory had passed and the ranks were rearranged:


"Pope Francis is the new leader of the global left."

There is no doubt that there are enough faithful people in the Catholic Church who would rather have another pope sooner than later. There are also some circles who still view Benedict XVI. as the truly legitimate successor of Peter. Thats the one thing. But a very different matter is a conspiracy to overthrow Pope Francis. Of course Jason Horowitz knows that too. If he nevertheless suggests the story, it does not lack intentionality. The most common intention is to distract. Above all, a more typically leftist outlook is projected onto the opposite side. There is more evidence that it has become more difficult to understand each other inside and outside the Church. Even more: On the left side of the enemy's delusion against the right seems to have progressed so far that only the smallest idea of ​​"opposition" thinking and feeling is apparent. It simply lacks the willingness to even deal with it.

The article reveals something else: Pope Francis has become very dear to certain circles of the left-liberal establishment. So much so that since the day of his election he has been generously supported by the media; so much that since then they have defended him to such an astonishing degree; so much so that, if necessary, they are eager to brush aside even serious issues. 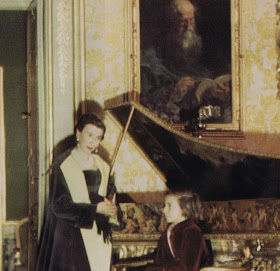 Horowitz uses another blueprint. He portrays the German princess as a new princess Pallavicini. The Roman princess (1914-2004) once said: Anyone who can transform his house can become anything in Italy, even president. Above all, the two princesses share the faithfulness and love of the Catholic Church. The subliminal comparison honors the mistress of the castle of St. Emmeram. Because one thing the energetic Roman woman did not do: neither conspired nor did she want to overthrow a pope. Nothing would have been further from their thinking, but it's not only Horowitz who does not seem to understand that anymore.