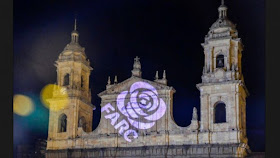 (Bogota) The Pope's visit to Colombia, which began on Wednesday, caused the entire country to be in a state of unrest. While, for political and religious reasons, some criticism of the Pope's visit was practiced, the symbol of the Marxist guerrilla organization FARC was projected on the facade of the Cathedral of Bogota during the night of the 1st of September. With this emblematic provocation, the FARC presented itself to the public as a political party at the end of its founding party.

At present, almost everything revolves around the communist "Narcoguerillas." Colombia's left-wing president Juan Manuel Santos (Social Party of National Unity, Partido de la U) had signed a peace agreement with the Marxist underground organization FARC in November 2016, although the people had rejected such an agreement only a few weeks earlier in a referendum. 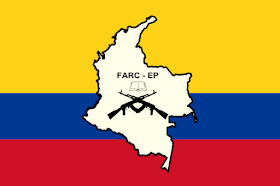 Former flag of the FARC

The FARC rebels, defeated militarily by Santos' predecessor Uribe, have been seeing their future as a political party since then. After the failure of the armed struggle, they want to take part in the country's policy in a new way. Critics accuse Santos of looking at future left alliances in order to cement his own power and prevent the return of the political right to government.

The FARC (Revolutionary Armed Forces of Colombia - People's Army) had been established as the militant arm of the Colombian Communist Party in 1965 to forcibly seize power in the country, based on the Cuban model and Soviet support. The 50 years of FARC terrorism has cost more than 200,000 lives. Only the hard military attitude of President Alvaro Uribe Velez (2002 - 2010) put an end to the ghost. His successor, Santos, Uribe was not allowed to stand for a third mandate according to the constitution, went the other way and put the FARC into the political system of the country. The motto is, from a guerrilla movement to political party. Many Colombians disagree, as the result of the referendum last year showed.

Santos found on the international level in Pope Francis the most important ally. The head of the Catholic Church, because of his sympathy for leftist groups, also known as leftist radical groups, supports the integration of the communist narcoguerrillas, so named because it was financed mainly from drug trafficking.

Francis made a visit to the country dependent on the acceptance of the peace agreement. Another aspect, which caused considerable reservations in some parts of the Colombian population against the imminent Pope's visit.

In addition to the political aspects, there are also strong religious reservations in Colombia against Pope Francis. Among Latin Americans, their attitude to various, relevant, topics is seen more critically than in Europe. At the end of July, José Galat Noumer, one of the most famous Catholics of Colombia, former Rector of the University of La Gran Columbia and a successful Catholic television entrepreneur, was excommunicated for "persistent criticism of the pope." Apparently, direct intervention from the Vatican at the Colombian Bishops' Conference was decisive. Before the Pope's visit they wanted to make a clean table.

The criticism has not been silenced, however, as a report from the Radio network RCN Radio showed at the weekend. A priest, who wanted to remain anonymous in order not to endanger his participation in a debate with Pope Francis, exercised severe criticism of the "direction" which Francis is giving to the Church. He knows at least 90 other priests who share the same opinion. He wanted to present his reservations to the Pope during the meeting, which is scheduled for the first day of his visit. He would also tell him that "many believe that he is associated with Freemasonry."

FARC is constituted as a political police: Start with "typically left-radical provocation"

As RCN Radio reports, "many" Colombians are convinced that Francis is "a communist".

This critical climate was further heated up by an incident last weekend. In the late evening of September 1, the new political symbol of the FARC was projected onto the façade of the Bogota Cathedral, the Church of the Primate of Colombia, and the mother church of the whole country. 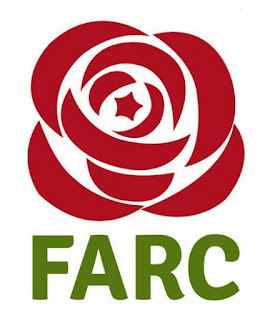 The previous, warlike Eastern Bloc iconography with Kalashnikov was abandoned. Instead, the new logo shows a stylized red rose, including the lettering FARC. In the middle of the rose is a five-pointed, red star. Observers speak of a conscious approach to the symbolism of the Socialist International to find international support for the entry into representative parliamentarism. The Red Star stands for the ideological conviction. The name FARC has been retained. According to the founding meeting, which took place from 27 August to 1 September, FARC is no longer for Fuerzas Armadas Revolucionarias de Colombia (Revolutionary Armed Forces of Colombia), but for Fuerza Alternativa Revolucionaria del Comun (Alternative Revolutionary Force Colombia," is meant).

After the collapse of the Eastern bloc and the end of the Soviet Union, the never-forbidden Communist Party of Colombia almost disbanded. In 1993 it distanced itself for the first time from its military arm FARC. Last July, the "reconciliation" and the announcement that a "new party" together with the FARC was to be launched and to stand in the 2018 parliamentary elections.

Founding party meeting with an anti-Christian or "pro-Church" provocation 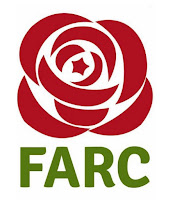 "Total rejection," Msgr. Mercado said, is a challenge for FARC

The new party was presented to the public on 1 September as the beginning of the founding party. A festival was held at Plaza de Bolivar in the center of Bogota. On this occasion, the new symbol of the left-wing party was projected onto the façade of the cathedral. A "typical, left-radical provocation" as it is called in Bogota. A few days before the beginning of the Pope's visit it was, as some say, a provocative but equally emblematic gesture.

It is provocative because Colombian bishops, because of their painful experience with communism and their hostility to the church, rejected the peace agreement a year ago during the referendum. Emblematic, because indirectly, Pope Francis has been called as a kind of godfather of the transformation process from guerrilla organization to a political party. President Santos and government representatives are not tired of establishing a link between the two events. The FARC confirmed this view with the light projection. The Vatican has so far denied such a connection and speaks of a "pastoral visit."

Image of Our Lady of Chiquinquirá 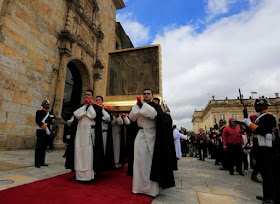 Just a few hours before the incident, the miraculous image of Our Lady of Chiquinquira, the patroness of Colombia, had been carried in procession in the same place. The image of Our Lady rarely leaves its usual place of storage in the Basilica of Chiquinquira. Because of the imminent Pope's visit, however, it was temporarily transferred to Bogota and displayed in a chapel of the cathedral. There, Pope Francis will visit. There, the faithful can also revere it, after the Pope's visit, it will be brought back to the Chiquinquirá, some 135 kilometers from Bogota.

The Metropolitan of Bogota, Mons. Pedro Mercado, showed his anger on Twitter with a "total rejection" of a photo of the FARC projection on the facade of the cathedral.

The sometimes contemptuous reactions that followed on Twitter reveal the spirit accomplished by the adherents of  FARC who have now become part of the global left, for which Pope Francis shows such astonishing sympathies.