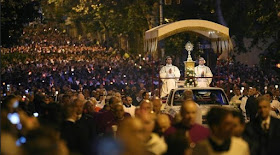 The Corpus Christi festival and procession through the streets of Rome was introduced in 1264 by Pope Urban IV for the public worship of the Blessed Sacrament. As the most ancient representations show, the popes did not participate on foot, but allowed themselves and the Corpus Domini to be carried. In the process, they remained worshiping all the time before the Blessed Sacrament.The Feast of Corpus Christi developed, so that on the feast itself the Blessed Sacrament was led from St. Peter's through the streets and quarters around. On Sunday a procession follows from the Lateran Basilica and in the octave of the feast once again a procession in the Vatican. All three were personally led by the Popes.
The procession of Corpus Christi became the most important procession in papal Rome and at the same time the most controversial since the Enlightenment.
In 1798 and 1799 it could not take place because Napoleon had occupied Rome at the head of the French Revolutionary troops and had proclaimed a republic. Pope Pius VI. was declared dismissed, exiled, and finally deported to France, where he died in August 1799 in the dungeon of Valence. In 1800, under his successor, Pius VII, the procession could be resumed, until Napoleon also captured him in 1809 and annexed the church state to France. After the end of Napoleonic rule, the Pope was able to return to Rome and again solemnly commemorate the procession from 1816 onwards.
In 1849, Giuseppe Mazzini and his Radical Democratic and Masonic fellows prevented the procession. The pope was at Gaeta and the new gentlemen decreed that the Corpus Christi processions could only take place "in the churches". Processions on public streets and squares were forbidden, for "fools are the ones who believe in the Blessed Sacrament," as the Protestant weekly newspaper L'Eco della Verità wrote in Florence in 1865.
When Rome was conquered by Italian troops in 1870, the procession was again forbidden. The popes had become prisoners in the Vatican. It should remain more than half a century.

The resumption of 1929 and the return of John Paul II,

In February 1929, the Lateran treaties were signed with which an international agreement between Italy and the Holy See could be found. In the same year Pope Pius XI. led the Corpus Christi procession, which now, however, limited itself to the St Peter's Square.
In 1964, on the occasion of the 700th anniversary of the introduction of the Feast of Corpus Christi, Pope Paul VI decided to lead it from the Vatican. In the following years, it was held in another of the numerous new Roman city districts. An attempt to get to the "margins."
In 1977, Italy celebrated Corpus Christi as a public holiday. Since then the feast has been celebrated on the Apennine peninsula on the following Sunday. The Vatican, however, adhered to the traditional liturgical calendar, and on Thursday after the Holy Trinity, the liturgy is celebrated in the evening.
It was Pope John Paul II, who, in 1982, returned the Corpus Christi procession to its original form, namely to the center of Rome and to the episcopal church. He had already fought successfully in Crakow in the years before and had succeeded in enforcing it with the communist state authorities. The Holy Mass was celebrated in front of the Lateran Basilica, followed by the procession through the streets of Rome to the Basilica of Santa Maria Maggiore, where the Eucharistic blessing was given.

"Through our participation in the procession of the Most Holy Body and Blood of Christ, we would like to testify in front of the city and the whole world. This is our liturgy of praise and thanksgiving, which we must not neglect before God and man. I will bring thee a sacrifice of thanksgiving, and I will call the name of the Lord. I will fulfill my vow unto the Lord / open before all his people" (Psalm 116, 17-18).

Pope Worships as a deputy for the people of God

After John Paul II had abolished the Sedia gestatoria for his assuming office, there was no longer any support with the reintroduction of the procession. It was replaced by a converted truck. It did not change the original attitude of the pope, as it had been for centuries. During the whole procession, the Pope knelt before the Blessed Sacrament and held worship. Although already very sick and strongly limited in his motor skills, Pope John Paul II took part annually up to his life's end, at last only with great effort.


The Corpus Christi procession of 2004, his last one, remains unforgettable. John Paul II could not go any further. Therefore, a chair was attached to the platform of the vehicle, before which stood the traditional prie dieu and above all the Blessed Sacrament. When the procession began, John Paul II turned to the master of ceremonies and asked to help him kneel down, which he was no longer able to do alone. He tried to explain to him that he was trying too hard, and that it was safer to sit. After a short while he repeated his request: "I want to kneel down." He was again consoled. John Paul II became serious because he did not seem to understand him. With reference to the Most Holy, he said vigorously: "There is Jesus ... please!" One could no longer be indifferent to such an insistent request.  The two ceremoniares helped the Pope to kneel down on the prie dieu. But as his legs would not lift him up, he had to be lifted back to the chair.

"How great was the deepest desire of Saint John Paul II to kneel before the Most Blessed Sacrament before Jesus. What an intensity, what a belief "in the real presence of Jesus Christ," said Alessandro Ginotta for Papaboys 3.0 in 2012.

The Pope as a pilgrim among tens of thousands - The denial

As early as 2013, Pope Francis took a first, apparently small, revolutionary change. He took part in the procession on foot. The most Blessed Sacrament was still transported on the vehicle. There, however, the Pope knelt was not there kneeling before the Corpus Christi, but just two deacons. The pope went behind the vehicle like thousands of other participants.The revolutionary is in the body. The pope is not some participant, any believer. He prayed for the sake of the Holy Liturgy, instead of the people of God. From the Pope's Mass all the masses go out.


In 2014, he briefly dismissed his participation in the Eucharistic procession because, according to the official statement, he was to visit Bishop Nunzio Galantino's diocese in Cassano dell'Jonio two days later, who he had appointed as a general secretary of the Italian Bishops' Conference a few months earlier. A visit to a small diocese, whose date was fixed by the Pope himself, was not seen by observers as a sufficient reason not to participate in a procession of so great importance as to bypass the real Presence of Christ, which to the gentiles and the heathen is folly and annoyance .
Francis left the Basilica of Santa Maria Maggiore in a car from the Lateran Basilica, where he celebrated the Holy Mass, it was where he awaited the arrival of the procession with the Blessed Sacrament.

In the car to Santa Maria Maggiore - transfer to Sunday

What was excused in 2014 with the visit to Calabria, which was held a few days later, has since become the standard. Also in 2015, after Holy Mass he was brought by car and the procession began to move. Pope Francis waited on the altar until the Most Blessed Sacrament had disappeared behind the house, left the square, and took a drive through other streets to Santa Maria Maggiore where he awaited the arrival of the procession and gave the Eucharistic blessing.


Pope Francis then undertook a second deep intervention. On March 28th, it was announced that he would transfer the Roman Corpus Christi procession from Thursday to Sunday. The "historical" intervention was justified by the fact that Francis wanted to follow the Italian liturgical calendar. The Italian Episcopal Conference had postponed the Feast to Sunday to facilitate the participation of the faithful after the Republic of Italy abolished Corpus Christi as a legal holiday in 1977. The Vatican, on the other hand, continued to hold it on to the original day, which still applies to the world Church. With his decision, Francis emphasized the pre-eminence of the Bishop of Rome to the Pope, who is responsible for the world Church.
The pope, however, had a second intention with the transfer, as it was unofficially called. In recent years, the number of participants in Holy Mass at the Lateran basilica has declined. The transfer to Sunday should allow for a greater participation not only at the procession, but also at the Mass.

The reasons for the papal intervention were speculated.
As is well known, the Pope does not worship kneeling before the Most Blessed Sacrament during the Consecration. There are also rare moments in which he kneels before Jesus in the sacrament of the altar. As a rule he stands, as the recent lenten exercises for the Roman Curia showed. Finally, on the 25th of March, he even sat before the Holy Eucharist in the Cathedral of Milan. An official reason for this like knee weakness, or some health problems, was never mentioned.
In any case, with the knee problems explained by well-meaning sites that Francis took part in the procession on foot in 2013 and, like everyone else, walked along behind the Blessed Sacrament.
When, in 2014, he completely canceled his participation in the procession, he was excused by the same kind of fond feeling, that the long walk was too strenuous for him.
Now the procession, less liturgical, was moved by him to Sunday. It can not, however, be confirmed whether he will again take part in the procession, neither kneeling nor walking.
Text: Giuseppe Nardi
Photo: Vatican.va/MiL/Wikicommons/RAI (Screenshots)
Trans: Tancred vekron99@hotmail.com
Link to Katholisches...
AMDG
Tancred at 5:15 PM
Share