The New Mercy as Interpreted by a Sexual Predator? 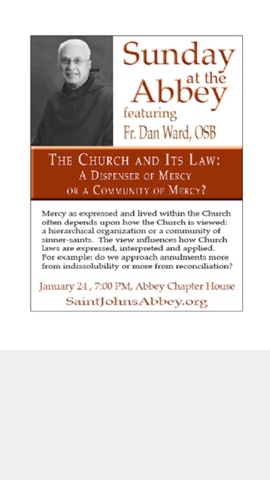 [Collegeville] what happens when a canon lawyer with all of the appropriate degrees is also a credibly accused sexual predator?  Saint John's Abbey houses what just might be the  largest concentration of free ranging sexual predators in the world. It was once the largest monastery in the world, but its numbers have dwindled considerably, and when encountering the monks, clear and distinct ideas develop as to why.

Father Dan Ward is going to attack the sacrament of marriage using his credentials in the appearances of legitimate ministry.

Ward has been credibly accused by former college students on four occasions of sexual exploitation. One by a young monk, and one student who came to St. John's Abbey for a visit after high school.

Now he's going to help stage manage the New Mercy in the annulment process, away from objectivity to the murk of sentiment.

Some Bishops have been dismissed and hounded out of their positions for far, far less. How about some mercy for the Church and take a long exile in the desert or leave the ministry entirely?
Tancred at 6:57 PM
Share