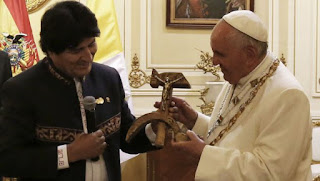 Update: we received this Rome Reports from a reader. Apparently, the Pope expressed his displeasure, but still accepted the blasphemous article with a smile on his face. Any surprise anyone would be confused?

We aren't hopeful that the Vatican Press Secretary will offer a satisfactory explanation either.

Edit: here's from the blog of Father Ariel Levi Di Gualdo who has this response to the event where Pope Francis met with Marxist Evo Morales, who presented to him a crucifix shaped like the Marxist hammer and sickle.

[Islodipatmos] Upon seeing this the Holy Father John Paul II, comes to mind. The immediate spontaneous thought: what would happen if during an apostolic visit to one of the many countries he visited during his long papacy, some of head of state had given him a crucified Christ on a sickle and a hammer?

Undoubtedly, many martyrs were "crucified" on the hammer and sickle in the twentieth century, but just what was the true intention of the Bolivian President Evo Morales?

We have no answers to give, but we can pray for all the victims of Communism, asking the intercession of all the saints and blessed who have given their lives for the Church and who were martyred in supreme hatred of the faith from the children of the worst of Marxist ideologues in the name of class struggle that has nothing to do with the Gospel and with the message of salvation contained in it.