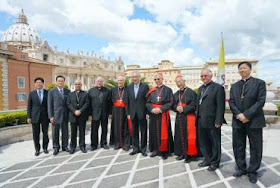 Edit:  Taiwan's Vice President, Wu Den-yih (吳敦義), has committed an act of sacrilege by consuming the Host and the Precious Blood at the Canonization Mass, despite warnings given previously by the Taiwanese diplomatic corp.

Even the Taiwan Bishops' Conference had a clear statement.

It's hard to see how, given the readiness with which it was given in the past to other world leaders, or the ecumenical atmosphere and informality which now seems to rule in the Vatican, how he would have been worried about offending such a protocol at all.  There have been no comments from the Vatican yet.  Do they even care?  Still, there has been a lot of criticism of the VP by people who seem to be quite ashamed of him, as Taiwan News reports:


A secretary for Taiwan’s Catholic Bishops’ Conference confirmed that the Eucharist should be only for Catholics who have undergone baptism by an ordained priest.

“Take this case involving Vice President Wu. It may be that he joined in because others nearby in the diplomatic group were doing so, and nobody reminded Wu about the rules,” the secretary, surnamed Liao (廖), said.

“Actually, I think this case was not too serious. Unless Wu had known about the restriction and breached it on purpose, which would be very disrespectful,” he said.
A number of netizens criticized Wu over the Eucharist incident.

One person surnamed Lin (林) accused Wu of “lacking understanding of diplomatic protocols,” while another netizen wrote: “Wu has shamed himself at the Vatican.”
Another posted under the name Chou: “Wu is an ignoramus. This shows that someone with a high education may not have wisdom or common sense.” 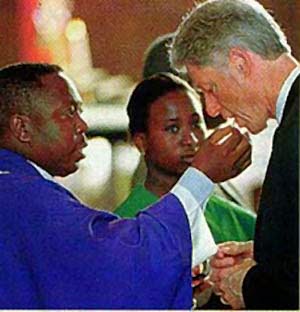