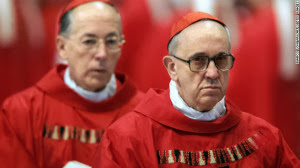 (Lima) Harsh words is what one of the most prominent representatives of the Church in Latin America, the Peruvian Cardinal Juan Luis Cipriani Thorn Cipriani, Archbishop of Lima and Primate of Peru, used in an interview with the Peruvian newspaper La Republica about an attempt to discredit him, which is in full swing from outside and inside the Church.

In July, Bishop Gabino Miranda Melgarjo, the Auxiliary Bishop of Ayacucho Ayacucho had been deposed by Pope Francis and returned to the lay state. The harsh measure was justified by "sins against the sixth commandment." Specifically, the accusation of pedophilia was brought against the bishop. While the allegation is proven for Rome, Cardinal Cipriani Thorne, is still behind Archbishop Miranda. Miranda is regarded as the closest confidant of Cardinal Cipriani in the Peruvian Episcopate. The Cardinal speaks of a "strategy to discredit" his person. It is known that Cardinal Cipriani Thorne doesn’t have only friends in the Latin American episcopate. The "Catholic rock" in Latin America isn’t just opposed by unchurched circles, but also the colorful spectrum of progressive Church circles of the American subcontinent.

For the Cardinal, the is evidence to the contrary, the presumption of innocence. He accuses Rome of having granted the defendants no way to exonerate themselves. Miranda, who was Auxiliary Bishop of the Archdiocese of Ayacucho Ayacucho since 2004, categorically rejects the accusation of pedophilia by itself. The investigation of the Peruvian prosecutors are still in progress.

Cardinal Cipriani sees a “conspiracy” in the dismissal of Bishop Miranda, which is in reality directed at him. His recent trip to Rome had been "taken advantage of by certain forces". The Church "will never be an accomplice of silence." What happens within the Church, however, was "surprising" and "needs to be clarified," said the Cardinal, who belongs to Opus Dei.

Cardinal Cipriani is regarded as the best known and most distinguished "conservative" Church leaders in Latin America. It was during his tenure as bishop that he has repeatedly been the target of smear campaigns, like in 2001 when then-President Alejandro Toledo forged documents played to the Vatican to discredit Cardinal Cipriani. Or 2011 as the anti-Church media launched a campaign of denigration against the Cardinal. At that time, the spokesman of the Archdiocese of Lima, Ricardo Sánchez Serra said that really was against the attitude of the Cardinal in his defense of the Church and its teachings, to his commitment to the protection of life, for the family and for marriage between a man and a woman. At that time the Cardinal was protected by Pope Benedict XVI.

“In July, Bishop Gabino Miranda Melgarjo, the Auxiliary Bishop of Ayacucho Ayacucho had been deposed by Pope Francis and returned to the lay state. The harsh measure was justified by ‘sins against the sixth commandment.”

errrr...that was MINIMUS, not maximus. :(

These looks at the past are interesting from a conspiratorial standpoint. You go backward from today and you just "connect the dots" to find the threads of conspiracy.