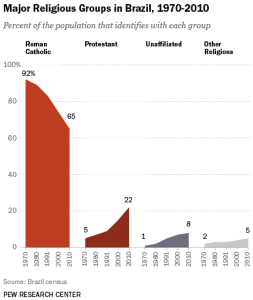 (Rio de Janeiro) Pope Francis is on a flight to the area's largest and most populous country in Latin America. The Catholic Church's leader will undertake his pastoral visit to Brazil up to the 29th of July. The reason is World Youth Day, which takes place this year in the Brazilian Atlantic metropolis of Rio de Janeiro.

The Pew Forum on Religion & Public Life of Washington has shown a graphical representation of the religious development of the Brazilians in the past 40 years.

Brazil is the country with the most Catholics worldwide. 123 million Brazilians profess the Catholic Church. It was not until half a century ago virtually the entire population Catholic, the proportion of Catholics since the Second Vatican Council has plummeted. From 92 percent in 1970 to 65 percent in 2010.

At the same time the Protestants experienced an equally unexpected and rapid rise. Their share in the same period grew from five to 22 percent. While the Catholics are holding during the years of he 20th century at just more than 120 million members, not decreasing, but not increasing either, while the number of Protestants has grown only since 2000 from 26 to 42 million.

By Protestant, is not meant the Lutheran or Reformed churches known in Northern Hemisphere. In Brazil this historical strand of Protestantism does not flower, but the Pentecostals and Evangelicals do. One in five Brazilians belongs to a group of younger Protestant sects which were imported from the United States to the Latin American country. Since then, several new communities that have arisen in Brazil, the Igreja Pentecostal Deus é Amor (IPDA).

On a smaller scale, other religions have grown in recent decades. Most through immigration. Within the country, the number of followers of syncretic Afro-Brazilian spiritualist cults such as Umbanda and Candomblé increased from six million in 2000 to ten million.

In 1970 there were less than a million without a religion, the number of agnostics and atheists has grown to 15 million.

The changes occur as a phenomenon in both women and men, among educated and less educated. It is more pronounced among the under-50s. One difference is particularly visible between the cities and the rural areas. While the country is still 78 percent Catholic, it is in the urban areas at only 62 percent where the Evangelicals and Pentecostals are particularly active, but also the number of atheists and agnostics is greater.

In Rio de Janeiro, the goal of Pope Francis, Catholics are at 46 percent only a minority. The aim of the Pope is to breathe new missionary life with his first trip to Latin America of the Brazilian church. A new vitality that is able to stop and reverse the trend and that radiates to other Latin American countries.

Pope Francis accepted the council of Pope Benedict XVI., with whom he meets in recent times more and more frequently, and prayed yesterday before the miraculous image the The Virgin of Rome in the Basilica Santa Maria Maggiore.

In the coming days Pope Francis will show how he presents the trend reversal against the erosion process of the Catholic Church to Protestant Pentecostals, agnostic and non-religious syncretistic African animist cults.