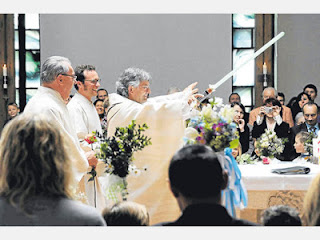 Hohenbrunn (Catholic news). There is a tremendous departure presently in southern Germany, which had its source in association with four parishes (St. Stephen in Putzbrunn, Ortisei in Sunnyvale, St. Magdalena in Ottobrun and St. Stephen in Hohenbrunn), from the tradition of the Roman Catholic Church. It wasn't Darth Vader who gave the blessing to the first communion children. This was personally undertaken by Pastor Christoph Nobs with a bright green laser sword at the celebration of a Star Wars First Communion Mass. The idea for the stars-War Communion came from Nicolas Gkotses community director. Star Wars had been a theme for the children in their religious instruction and so he tried to communicate the gospel in this way in a timely manner. - "May the force be with you!"