Accusations Pile Up Against Modernist Abbey: But Conservative Priests Are On the Menu

Editor: Despite continued accusations of a former Abbot of a Modernist Monastery in the Midwest on the Pine Curtain, the neo-Catholosphere is bent on destroying a conservative priest who has been accused of some things he may never have done. Never mind that the Bishops these electronic Princes of the New Church routinely defend and often support have Modernist conceptions of Catholic teaching themselves. The following is from the Pine Curtain on June 26th:

Abbot Timothy Kelly has been accused of engaging in sexual misconduct with an altar boy (and at least four others) at St. Anselm’s Parish in Bronx, New York in 1966 and 1967. Father Timothy Kelly later became Abbot of St. John’s Abbey and President of the American-Cassinese Congregation. Abbot Kelly’s background, the complaint and other links are available below.

The Abbey has been engaged in stonewalling, intimidating, denying or dismissing those its Monks preyed upon for the better part of twenty years.

Father Corapi, on the other hand, has been fairly straightforward, teaching doctrinal Catholicism, orthodox and uncompromising Catholicism.

In any event, it's important now to look at the accusation itself, which looks pretty ill-prepared and frankly, mean-spirited itself, not to mention patently untrue.  Mundabor mentioned that he didn't believe that Solt would open themselves up for a liable suit, well, here it is.  It's a pretty low blow to publish someone's bottom line and use it as a way of supporting slanderous allegations that someone hasn't been true to their vows, even when they haven't sworn to any vows which Bishop Gracida, Bishop Emeritus of Corpus Christi, maintains, Father hasn't sworn.

He has recently engaged in sexting activity with one or more women in Montana; He holds legal title to over $1 million in real estate, numerous luxury vehicles, motorcycles, an ATV, a boat dock, and several motor boats, which is a serious violation of his promise of poverty as a perpetually professed member of the Society.

Father Corapi's religious community, Solt, claims that Father Corapi has taken a vow [or promise] of poverty. Actually, the vow of poverty wasn't included in Solt's Constitution till 1994 and Father Corapi wasn't part of that. He's had his own situation since before that, and they saw no need to reel him in and had no problems with it, apparently, till now when they want to use it as a means of supporting other allegations, which Father Corapi, we assume, is denying. They obviously had no problem with it when he had to pay the hospital bills as a result of a serious illness, or his legal bills when he was accused of rape last time.

These rumours have been circulating for some time, but not Father's superiors have decided to act on them with the urging of the Folcolare cult member, Bishop Mulvey of Corpus Christi.

We don't now what Father Corapi is going to do. He's said he's innocent of these charges as in "innocent until proven guilty" unless you're into internet trials like Mark Shea, who's so graciously condescended, if insincerely, forgiven everyone for his over top trial by internet, which, he previously claimed he doesn't do. At least when it came to a Jesuit Novice who once petitioned and campaigned for homosexuals having sex in public restrooms and gave a fawning interview to a leading light of NAMBLA, he was against internet trials, he said. He removed the following entrance from his blog. Since that time, the offending Jesuit has left the Society of Jesus, back in November- December of 2009:

~ MORAL MIDGET Jesuits on the Cutting Edge of Societal Evolution! “In the further adventures of a culture in which consent is the sole criterion of the good, I bring you Cormac Brissett, Jesuit seminiarian, and his brave stand (along with co-signer David Thorstad, founder of the North American Man Boy Love Association) against “sexophobia” …. (markshea.blog)

After generating a lot of controversy, Mark Shea removed the entry on the offensive Jesuit, because he claimed back then that he doesn't believe in trial by internet. What's changed? Perhaps it's got to do with whose side he's on? Or who intervened on behalf of the Jesuit, who remained in the Society of Jesus for almost another year, during which time he continued to work with "at-risk youth" in Chicago.

Speaking of sides, you're worried about a single Conservative priest who has about a million dollars in assets, when St. John's Abbey Collegeille, receives about five thousand students a year? This story has sadly received virtually no attention despite the fact that accusations are piling up against it, even as one of its former Abbots who covered for sexual predators on his watch, and even losing documents, was himself guilty of preying on the young; just to remind you. It's 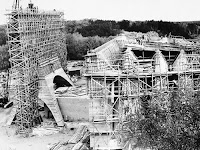 press dying out, but not fast enough.

But you know what sort of people like St. John's? It's been a pustule of heterodoxy, bad architecture, heresy and the disappearance of a young man in 2003 who's still missing. It's also a major publishing a house and a place where most of the students leave the Catholic Church as soon as they graduate, if they haven't already done so while going to school there, and if they didn't have the Catholic Faith when they came, are almost totally unlikely to get it during their stay.
Tancred at 4:10 PM
Share