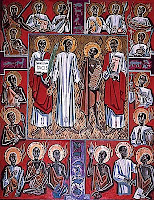 Editor: It's not clear whether the author of Crabby Roads is on board with the Catholic Church's position on homosexuality. He seems to understand the problem, but then, looking back over his shoulder as he leaves the city, he occasionally praises the architects of the disaster and wingdes when they are exposed. His recent post on the Ugandan Martyrs is very good and right on. We didn't know that they were murdered by the King because they refused the King's homosexual advances. It's truly a tribute to the spirit of Sodom, the vindictiveness that individuals disturbed with homosexuality, engage in insults, threats and even violence to promote their depravities as normal.

Like many of God's most beautiful creations, the Martyrs of Uganda were brutally slaughtered by vicious men.

The following essay is an interesting piece in that line. Once again, the editor of America Magazine breezily insults people who write letters to him complaining about the homosexuality rife within the Jesuit order, no doubt, they're sincere if not good at expressing themselves in writing. We know that Father Martin is a homosexual enabler. Only a homosexual enabler portrays the need for "homophobia awareness" month, and we'd ask Father, what's crazier, someone who is angry and wounded enough by the crimes of the Jesuit order to write halting letters, or someone who fundamentally disagrees with the Catholic Church's teachings on sexuality, but chooses to continue calling himself a Catholic, even drawing a salary from that Church, writing for a highly funded, glossy nationally circulated magazine that frequently betrays the Catholic Church as it has done at least since the twenties?

Who's crazier and more contemptible, you, or the "crazies"?

You won’t be surprised to discover that we get all kinds of crazy letters here. And I don’t mean simply letters that seem odd or strange, or even letters that I don't fully understand—I mean crazy. As a Jesuit friend told me last night, “No nut like a religious nut.” One fellow sends me (regularly) a packet of folded-up colored paper with instructions on how this can be used to communicate with angels. Another correspondent mails pages and pages of tiny, mostly illegible, scrawl covering every inch of several pages, with Gospel passages underlined three times. So one learns to discount the nuttier letters. And one learns to accept more easily criticism from "non-nutty" people as well, even when it's delivered with sarcasm and invective. One's skin gets thicker, I think.

On the other hand, some letters tend to stick out. This morning I was opening up yesterday’s mail and noticed an envelope without a return address (never a good sign). Inside was a copy of an Of Many Things column I had written about the beatification of John Paul II. In the article I mentioned that Blessed John Paul had, at one point in his papacy, removed Pedro Arrupe, S.J., the superior general of the Jesuits, from his post in 1981, a move that dismayed many Jesuits. The letter-writer had highlighted those few sentences in bright yellow. Next to it was a Post-it that read, in full: “But Jimmy, so many Jesuits were screaming fags that something had to be done, you know, to clean the filth out of the clergy.”

Not the pleasantest thing to read in the morning. And who knows whether this person is a subscriber or not. (He, or she, seems a bit cowardly though: the lack of a return address demonstrated a lack of resolve.) Odds are, though, if he's reading the print version of the magazine, he’s probably Catholic, and even if he's not a subscriber is likely reading it in a parish or a library. (We don’t sell on newsstands.) And he knew enough to quote Pope Benedict XVI on the “filth” in the church-- referring to pedophiles not gays, but no matter.

Homophobia is still out there, no matter how much we would wish to think of ourselves as an enligtented culture, and exists in our church. Thus, the need for June as “LGBT month,” as just proclaimed by President Obama.

Link to original... before Martin changes it.
Tancred at 11:13 AM
Share