Bolivian Bishop Denies “Slanders” He Has a Family

Edit: the retired communist bishop who doesn’t always wear clerics in public is also close friend of Evo Morales, the Marxist leader of Bolivia. Obviously, this is a priest who’s very close to the people! Certainly he’s too close to the wrong people!

Watch out Ed Pentin, OnePeterFive and Adlante de Fe! You’re about to get a dose of #Francismercy

[katholisches.de] It is said that Bolivian bishop Toribio Ticona Porco (81), to be appointed cardinal at the end of June, has a family of his own with wife and children. "Due to a false accusation that has been spread in some media regarding my private life, my job is to clarify that the contents of this message are not true," Ticona Porco said in a statement published  by the Bishops' Conference of Bolivia on Tuesday evening (local time ). He described the alleged slander as an attack on Pope Francis: "These are attacks that come from sources that are known for their hostile attitude towards the Holy Father," said Ticona Porco.

He was ready to defend his honor in all necessary instances, added the bishop. The rumors that have now spread by the blog "Adelante la fe" and the Argentine TV show "El compromiso del laico" are not new and have been previously exposed as simple slander, said the former bishop of Corocoro. He is one of the 14 churchmen whose appointment to Cardinal Pope Francis had recently announced for June 28th. 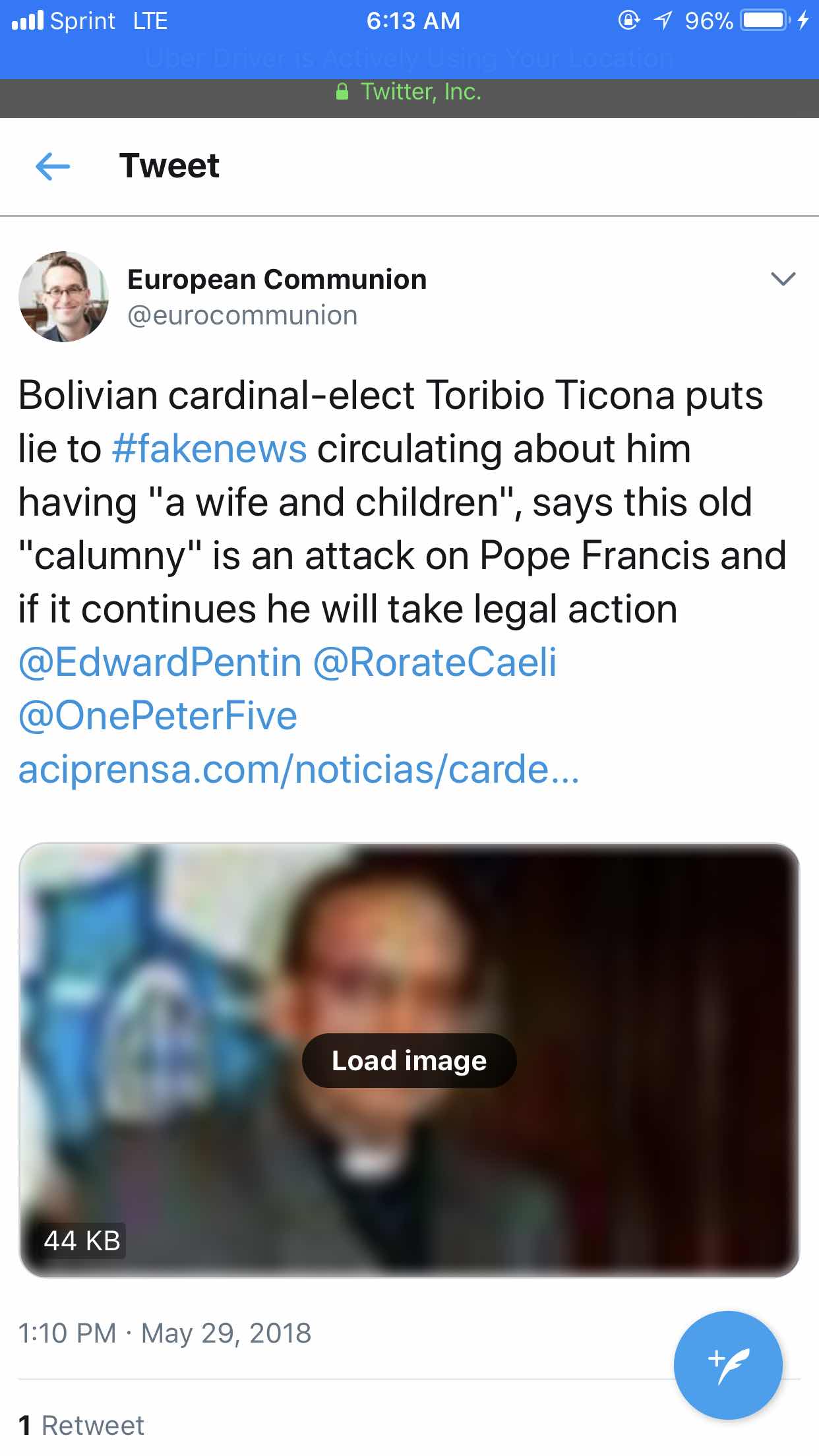 Toribio Ticona Porco, 81, comes from an indigenous family in the highlands of Bolivia and, before becoming a priest, worked as a shoeshine boy, in a beer tavern and in the Potosí mines for the livelihoods of his parents and siblings. Born in 1937 in Atocha, Ticona got to know the harsh everyday life in the southern Bolivian mining region. After studying - including in Brussels - he kept his proximity to the region and the people: first as a priest, then as Auxiliary Bishop in Potosi, finally, from 1992, as Bishop of Corocoro. For several years he also served as mayor of the city of Chacarillas.

At that time, five diocesan priests and ten religious priests worked on an area of ​​29,000 square kilometers. During his 20 years as a chief shepherd, Ticona considered it a matter of honor to learn all other languages ​​of his church district besides Spanish and Quechua. Bolivia's President Evo Morales, with whom the New Cardinal enjoys a personal friendship, announced this week that he would accompany Ticona Porco to the Vatican at the end of June. (Rom / KNA)
AMDG
Posted by Tancred at 11:15 AM

He protests too much! He makes excuses and drags in the name and image of Pope Bergoglio, trying to say it's acutally an attack on Francis.
He's a master of deception, just like Francis.
Plain and simple, he's lying.
Damian Malliapalli

You have my support Damian.

Just get the woman and the children, and make them and him do a DNA test.

Has he denied he has / had a mistress? No, he has denied having a wife. I think he is speaking precisely. Who thinks he got married?

There is an update on this at 1P5 here
https://onepeterfive.com/report-married-bolivian-bishop-will-be-made-cardinal-by-pope-francis/#comment-3923885474
Ivan

That's a real violation of valid judgment, JFK! He might deny having a wife, but do you think him not denying having a mistress makes everything ok? He shouldn't have that either.
You've heard of common law wives or husbands, haven't you? It when you live with someone for a certain number of years, share funds together, maybe have the same insurance or medical coverage, but aren't officially married(in church, or even civilly), it's called common-law wives (or less frequently, husbands). It's when you support each other, share in common, etc. but there's no tie that binds.
Regardless, he should bow out. We already have Pope Francis rad fan club members Cupich and Tobin here in the USA....wonder how many other losers Bergoglio has picked besides this guy, for this summer's crop of red hats.
Damian Malliapalli
Damian Malliapalli

Once again, Damian takes out his hammer and pops the nail right on the head.

Damian Malliapalli,
If you think I approve of his behavior you are gravely mistaken. I'm saying he is try to play word games. He denies having a "wife" as the Church defines a "wife". I don't care whether or not his country recognizes "common-law" wives. What does the Church recognize? Not

He is a snake and speaks with a serpent's tongue. That's why he's good friends with PF and why he's being given a "red hat".

Prove the inference and allegations otherwise you open yourselves to the charge of slanders and defamers.

They evidently have too much proof that he has a 'family'....an 'irregular' one but hey, weren't 'irregular' marriages what A.L. rose to the heights of sanctity after all? He is probably technically correct that he is not 'married' but he has been 'shaking up' for years with a woman (at least it's a WOMAN!) and that 'relationship' has produced two children. Probably not such a big deal to Bolivian people, since South American people don't value legalized 'marriage' anyway. I guess being a Catholic 'Bishop' in this situation is no big deal to them either, as unbelievable as THAT is! As some of us have read more than once, most S.A. couples don't legally get 'married' until they are grandparents for whatever reason.

That’s what you do, Feybrielle.

I think it’s pretty clear he has a concubine stashes. This is probabaly a ploy by Bergoglio to gain more steam for ending clerical celibacy in the Roman clergy.

I just find it hard to believe PF appointed a heterosexual. The Marxism and error ticks the boxes for a FrancisCardinal, but a sexual interest in women and not little boys, unlike most 'Spirit of V2' Conciliar Cardinals, makes for an unlikely appointment. We'll see.

As a public figure it is incumbent upon him/his superiors to respond to these accusations with substantial evidence to the contrary.
Since he merely denies guilt and the Vatican remains mute the seriously grave issue remains alive and active in the minds of the conscientious faithful. But, like the Maradiaga affair -- about which there is abundant evidence -- this will be ignored.
Where is vital Catholic journalism?
More importantly, where is the integrity of the Roman Catholic episcopate?
I'd ask where Vatican is but that is quite evident. In a living hell.

The silence of the Vatican of Pope Francis I think givens additional credence that the "rumors" about this potential cardinal are true. After all, Pope Francis and his crew are so underhanded and sly, that they would not want to come running to this guys defence, professing his innocence and that he has been slandered and defamed, when they in fact know 100% that it is true. The story would explode in their face, and make them look infinitely bad than if they were to keep their silence. This is terrible in itself, because it gives the impression that the Vatican knows there is no defense for this guys actions, and to muster a half-hearted defense would be a waste of time in the face of evidence. Better to pretend that they know nothing. Which of course is B.S.
In answer to some of your questions (but at the risk of sounding to bitter or cynical), there are no conscientious faithful priests, monsignori, bishops,or Cardinals left in the Church with the backbone to stand uo to the asshole Pope Francis regarding this cardinalatial appointment (any other more serious things). Sad, and tragic, but true. They have no more backbone than did Benedict XVI, who wimped out and quit under the pressure of these radicals, t=rather than stand and fight.
If he had hung in there and stayed as our Pope despite the wolves, Bergoglio would have retired, turned 80, and would be ineligible to be elected Pope Francis.
As for the Mariadiaga affair, I think Pope Francis is letting him slide for two reasons. 1). Maradiaga has metastatic prostate cancer....he won't be around for long. From what I read, he isn't doing well. His passing will not resolve the issue, because others are involved, but Bergoglio, being the kind of man he is-protective and supportive of fellow radical liberals- will let Mariadiaga slide, and then shed crocodile tears for him once he's dead, praising him as an outstanding servant of the Church. B.S. again.
Vital Catholic journalism exists only in a few places, and where it publishes the absolute truth, it is often attacked and hounded out of existence by the Pope Francis posse who are determined to protect their chief and his radical dissenting, heretical agenda. Kreuz.net was one outstanding victim. If they had any sense, they would re-establish themselves despite threats from the Bergoglio team. The only vital, truly Catholic journalism sites are here at this site, at Rorate Caeli, 1Peter.Five, The Remnant Newspaper, and, believe it or not because they have become extremely negative and critical of Pope Francis......EWTN!!! aND THERE ARE DOZENS OF OTHERS TO BE SURE.
Lastly, the integrity of the Roman Catholic episcopate pretty much was destroyed by Vatican II and the last 50+ years. Paul VI, and now Bergoglio, tried to pick the worst and the most progressive radicals to carry the flag of Vatican II. Vatican II is dying, and Bergoglio knows it, so he is dredging the bottom of the barrel of episcopal appointees to find those aging men who still bear the stamp of Vatican II in their hearts. There are not many left. When they die out, the JP II generation, and especially the Benedict XVI generation who are not rabid Vatican II lovers, will slowly change things back again. Episcopal integrity is something we will not see in our lifetime. I am only 30, but I do not expect to see the return of a truly Catholic, traditional minded episcopate in my lifetime, unless by some miracle Pope Francis suddenly drops dead and the Cardinals by some miracle of the Holy Spirit actually present in the conclave(the Holy Spirit was absent the last time folks), elect a strongly Catholic and tradition minded (though perhaps not a traditionalist) Pope.
Finally, it is a living Hell to have a Pope and Vatican like this. I suppose God is punishing the Church with Bergoglio, only to rise it up again with a traditional Pope. Hopefully this miracle from God will happen before 2020 :)
Damian Malliapalli