It's Back on: Immemorial Mass of All Ages in Dominican Rite to Be Celebrated at Dissident Basilica 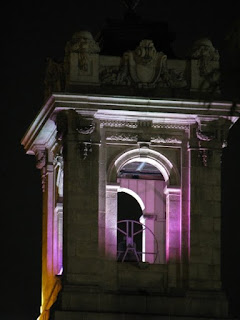 We've just been informed by Equiti Albo Crucis that there will be a Mass on September 19th at 10am at the Minneapolis Basilica, a beaux-arts edifice dear to the local  community of artistic single people.  Despite the indisputable beauty of the place, the Liturgies there are illicit if not blasphemous, the atmosphere is one of languid self-satisfaction of the well-to-do and the well medicated alike.

The celebrant will be Fr. Dominic Holtz O.P. who is currently a professor at the Angelicum.

The Basilica of St. Mary's is a parish which hosts dissent against the Church teachings.  Whether it's Father Timothy Bachous O.S.B.,, who occasionally preaches there.  Apart from the accusations of sexual abuse against him, his views on sexuality and natural law are not orthodox. Or former catechist Lucinda Naylor. Will they perform an exorcism over the place, beforehand?   I'm thinking the church should probably be reconsecrated.

A few years ago one of our priests delivered one of his strongest homilies ever using only a minimal number of words. After proclaiming the Gospel he walked down to the communion rail and demonstrably closed the bronze gates thus separating the sanctuary from the nave of the church. Standing in the sanctuary behind the closed gates he said. “This is who we used to be.” Then he opened the gates as wide as he possibly could and walked into the nave saying “This is who we are today.” Without another word he walked to the celebrant’s chair and sat down. In response, the congregation stood up and burst out in applause. Now, I am not a great lover of homiletic props but in this rare case it worked and I will never forget the message.


Paintings by aberrosexual activist Lucinda Naylor still hang (Sometimes they take them down when people complain to the pastor, John Bauer.) from the Stations of the Cross in the Church,

It seems the organizer of an event hosted by the Basilica is the Knights of the Holy Sepulcre.
.
Our question is as always, why hold an event at a location like this that's reputed to be "orthodox" and sound?   The Knights are holding their annual meeting here.  What's Una Voce thinking, since they are at least partly responsible for the event?   Did St. John's Abbey offer the a deluxe edition of the St. John's Bible?
Tancred at 5:13 PM
Share