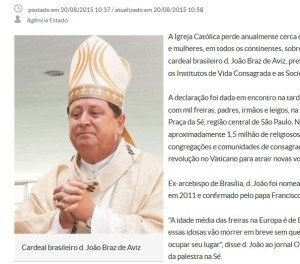 (New York) The Catholic Church loses 2,000 religious   world-wide  every year. The loss has its clear focus in Europe. Cardinal João Braz de Aviz, Prefect of the Roman Congregation of Religious drew a bleak picture for the future of Orders in Europe. "The average age of women religious in Europe is 85 years, which means that they will soon die without being replaced." In other words, they are dying out.
The  Focolare Movement cardinal spoke  last August 19 at a meeting with religious in the Cathedral of Sao Paulo in Brazil. Currently, there are approximately 1.5 million religious and 3 million members of congregations and communities of consecrated life worldwide. The former Archbishop of Brasilia in 2011 was appointed by Pope Benedict XVI. as Prefect of the Congregation of Religious and 2013, confirmed by Pope Francis in this office. Growth is takingn place  on a larger scale in Africa and Asia. In Europe the situation is, however, dramatic.

Said Cardinal Braz de Aviz of collapse knows nothing comparable in the Church's history, at least not on this scale, which affects almost the entire European continent. A similarly dramatic process of dissolution was experienced in  Catholic monastic life was only experienced in the countries of the Reformation. The circumstances are still difficult to compare. Early 16th century it was an explosive appearance, while a long infirmity is now to be observed, to name only one aspect. In many parts of Europe, the honors system was then powerful and alive.
Cardinal Braz de Aviz also personally embodies the de facto destruction of the Order of the Franciscan Friars of the Immaculate. Their tree bore fruit,  in contrast to many other religious, and yet - or perhaps because, as some people think - it was needed.

"Knots" that are to be untied for Recovery Brothers and sisters of the Franciscan Friars of the Immaculate: Founder Father Manelli celebrated in the traditional rite. "By their fruits ..."
The Government site of the Brazilian state of Minas Gerais has published several "knots", which need to be  resolved, according to Cardinal Braz de Aviz, to establish Catholic monastic life again.
First, the cardinal spoke to the vow of poverty: Many religious possess millions in assets, such as deposits with the Vatican Bank IOR, half of whose deposits belongs  to Orders. He spoke of an order with a religious vow of poverty which, without saying who  the Order is, has 30 million in the bank.
The Cardinal also complained of the often "oppressive" ways  obedience is lived within Community. Obedience is necessary, but must be exercised as an obedience between brothers. In this context, the prefect complained lack of a "turnover" of superiors. He mentioned the example of religious superiors who are vested in their office at 35 years old, who are "damaging to their subordinates". There were also religious
superiors, the Cardinal said, who change the rules of the order to remain in office for life.

Braz de Aviz also reported the case of a former provincial superior of a  congregation of women religious who petitioned for a dispensation at the age of 80 from the order in order to fulfill her "desire for motherhood." They left the order and have adopted a three-month-old child.
The cardinal commented that it was necessary to create a family atmosphere in the communities. As a possible way to a familial atmosphere the Cardinal called for the establishment of joint communities. In this regard, there are outdated ideas to overcome, said the prefect of the Congregation for Religious: "In the past we had difficulties when it comes to living together, because it was said that one must be careful, because the woman is a danger because the man is a danger ..." ,
The cardinal added the limitation that he "would not recommend the creation of mixed communities in the same house" at least, because the third vow of chastity, would have to be retained.
The speech, according to the report, had been acknowledged by the attending religious representatives with long applause. The President of the Conference of Religious of Brazil in the state of Sao Paulo, Sr. Ivone Lourdes Fritzen, thanked Cardinal Braz de Aviz for his "openness and transparency", as regards the challenges of religious life.
Text: Giuseppe Nardi
Bild: Estado de Minas (Screenshot)/MiL
Trans: Tancred vekron99@hotmail.com
Link...
AMDG
Tancred at 5:21 AM
Share