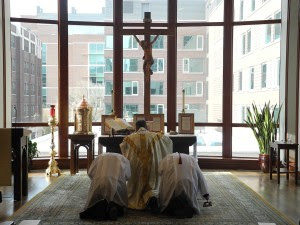 (Washington) The Jesuits are, as elsewhere, shadow and light together. What matters is what prevails in a given time. There were Jesuits who exchanged the cross for a Kalashnikov. The Jesuit University Gonzaga University in Washington state recently denied a Catholic youth organization recognition, because it accepts only Catholics. There is complete silence about esoteric Zen-inspired and Eneagramm hunters among the Jesuits.

In the Jesuit Order’s Church of Santo Stefano in San Remo (Liguria) end of 2007, the rector of the Church, himself a Jesuit, celebrated Mass in the extraordinary form of the Roman Rite according to the Motu Proprio Summorum Pontificum, was forbidden by the Order Provincial Father Francesco Tata SJ to say any more Masses. The Motu Proprio of Benedict XVI. will not be implemented in all of the churches in Italy assisted by the Jesuit Order, said the Provincial. At the end of 2012, the American Jesuit Father Bill Brennan was suspended and prohibited the exercise of his priesthood, after the 92-year-old “concelebrated Mass" with a self-proclaimed Catholic "priestess" woman "concelebrated Mass”.

But there are good initiatives that ensure a future for the Order. In the German-speaking area there also emerged from the Jesuit Order, a New Order called The Servants of Jesus et Mariae (Servi Jesus et Mariae, SJM), which has been founded for the celebration of the Mass of Saint Pius V and its founder, Father Andreas Hönisch himself was a Jesuit. We have already reported on the conversion of the chapel of the Jesuit High School of Tampa in Florida. In July 2012, Father William V. Blazek SJ of the Chicago-Detroit Province of the Order is one of 12 new priests of the Jesuit Order in the U.S. who has celebrated his first Mass in the extraordinary form of the Roman rite.

In winnipeg canada a young jesuit says the traditional mass publically at a church each sunday, in spite of his confrers being beyond liberal...

God bless this young priest. May the Mother of God protect him always.

May many more Jesuits follow his good example.Jesuits must come back to fulfil the mission for which St.Ignatius Loyolo founded this Society. May God Bless this priest abundantly.Now that we have Jesuit Pope, will he command the Superior General of the Society to lead the members of the society in the right direction.

It is sinful to be a passive-aggressive jackass. So stop it.

@Robbie Benson, what are you talking about?

Return to the Tradition within the Company?